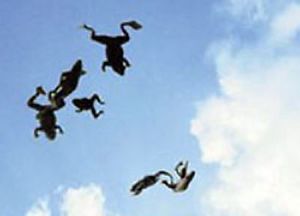 "Flying frogs are so graceful: they truly are a sight to behold" -- Francis E Dec

The World Frog Throwing Championships is an amphibian-throwing event held annually in Ilfracombe, Devon, England. It is the third fixture in the World Animal Throwing Tour, and the most prestigious event on the WATT calendar. The person who can propel an amphibian the furthest is awarded the WFT title and a book token for fifteen pounds, as well as points towards their Animal Throwing world ranking (The Ribbit Charts).

The Championships have a long and illustrious history, beginning over 150 years ago on the beaches of Combe Martin. Residents would gather annually to fling their frogs further and further until it was suggested that a tournament be held. When the sport of animal throwing was professionalised in 1923, the first ever Professional Animal Throwing event was held there the following year.

It is tradition for a celebrity guest to officially open the championships. In past years, Nelson Mandela, Eric Cantona and David Dickinson have all been first to 'frog off' and begin the illustrious event. 1967 saw a visit from The Queen, who, after ordering her butler to wipe her hands, catapulted an amphibian a respectable 15 metres, earning her a 34th place finish: the highest of any celebrity 'frogger offer' in the history of the competition. The closest anyone has come since was Janet Street-Porter, who placed 40th of 71 in 1992.

An elaborate celebration is held until long after midnight on the day of the event, usually involving the cooking and eating of any surviving frogs. It is estimated that three tonnes of frogs have been consumed in the town since the inaugural event in 1843 as a direct result of amphibian-throwing competitions.

Competitors traditionally play a game of 'step on the crab' before bogging off back to their respective homes around 1AM on the Monday morning. The last Monday in May has the largest figure of absenteeism from places of work anywhere in Britain, a phenomenon known colloquially as amphibian absenteeism. [1]