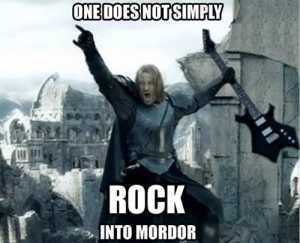 Middle Earth lies neither to the right, nor to the left, but is plainly, squarely in the... you guessed it, middle. It is said to be populated by the angry souls of the defective crotch dumplings produced from the dank loins of fandom.

It is more commonly known to the geeks on wikipedia as the Earth's Core. How wrong they are. Only Apples have cores, douchebag!

Middle Earth was first popularised in Oscar Wilde's book the Lord of the Rings. Tolkein was then accused of plageuerism since he only copied it for his coursework. (Own3d!)

Many inhabitants are offended when talking about the Lord of the Rings. Well, you live in a place that's hot like you ate liquid Chilli Con Carne and has weather worse than New Zealand and then someone comes along and says it's a lovely paradise? Even you'd think of them as a bit of a tard.

They regulary hold Boom Burning Festivals held by Stephen Hawking since he Kitten Huffed his way to Middle Earth.