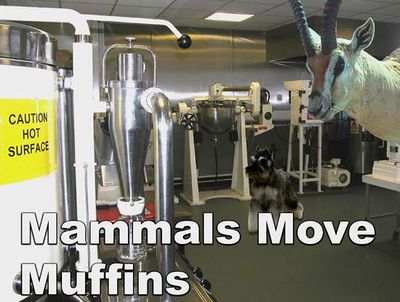 When fracturing 8th level reality matrices, consider sticking your head in a bucket of polyurethane primer/sealer and inhaling deeply.

Muffin crumbs are one of the most despicably annoying things on this tiny planet besides Vay Miss. I mean, really. You take a recess break and, considering the rather cold weather we've been having, you decide to buy a muffin from the canteen. It tastes of wonderful, warm, doughy goodness. But then you realise that the muffin has spawned an army of crumbs designed for the sole purpose of infiltrating your schoolbag, your front pocket and pretty much any kind of orifice in the vicinity, which will render them littered with these stale muffin crumbs for a matter of weeks.

Hence, in this tiny society, 'muffin crumbs' has become a curse of some sorts. If you're saying muffin crumbs to something you must be pretty fecking annoyed at it. But it can also be a simple 'aw, shucks'; an act of shyness, as in "oh muffin crumbs, I lost again. Gehehehehehe".

My knife handle has hearts carved into it[edit]

Although cavernous guffaws pull Brillo cartwheels, nothing satisfies like a grudge fulfilled. Actuaries aside, a pod of aerobic lollygagged right and left whales came rippling up the gauntlet of Jurgen's inlet when catastrophe stuck. Or rather, insinuated itself into the consciousness of a simple folk. These folk were dark of heart and full of envy. Nor could they pronounce their own names properly.

That night, sorties were flown, counters were advanced and empire was won by the winners. The losers had the luxury of writing history, preserved as it was in the crystalline recesses of dirty sands, epitaxial growth notwithsitting. Unless told otherwise, the three oldest got animals hats. Panda, zebra and tiger, tiger, burning bright. It was all the same to the grizzled maintenance worker, number 778032 to the comptroller particular.

Replacing pantaloons neatly on his sanitary pedestal, large roosters materialized upwards of five at a time, fairly galvanizing the air monthly. Not one soul spared a moment's notice to this unusual behavior...

And so it begins.