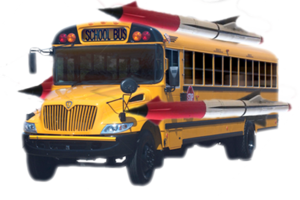 The poorly built bus before attempting to take kids to Neptune for the first time in history.

The poorly built rocket bus was a importantly pivotal vehicle utilized in the early 1950's to transport kids from their homes to assorted places such as school, the moon!, and the sun. Given the nickname "Ol' Rickety" by numerous passengers, the bus serviced happy, satisfied children for years until it exploded due to design malfunction on a trip to Chuck E. Cheese.

From it's introduction to it's gruesome ending, taking the bus to places was a childhood tradition that "all the cool kids" had to do at least once. In its Glory Days, the bus would take up to thirty kids on a tour of Earth's orbit; however, due to it's lack of pressurization devices and air-tight seals, most of the children died on the trips to outer space, which lead to much controversy from parents.

No one knows for certain who designed the poorly built rocket bus, but due to its terrible design most people conclude that it was the work of Francis E. Dec. A brief description of the vehicle's design include a mention of the following:

The simplistic and oddly primitive design involved taking a few rockets and taping/tying them to the sides and top of the bus. Then someone would tie a string the the rocket ignition switch, so the driver of the bus could pull on the string to make the rockets go and propel the bus forward. The bus itself had its engine stripped from the block years back, so the rockets provided the only way it could move around. Due to this, it's minimum speed was around 200 mph, so the driver received many speeding tickets, especially near schools, where the speed limit is 25 mph. 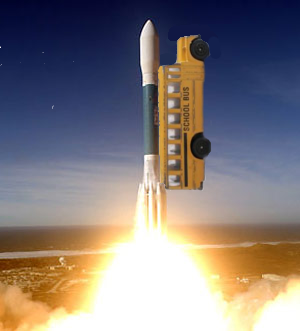 The Rocket Bus in use.

When it was used, it traveled really fast, and made several children crap their pants on rides to school. This happened at least twice a day, so soon concerned parents began purchasing more diapers for their "little angels".

On one occasion, the driver of the bus accidentally hit a jump and then went airborne, followed by leaving Earth's atmosphere. Seeing this as a great opportunity for profit, the driver began taking kids' lunch money in return for a trip to themoon and back. Most of the kids forked over the cash, however, some didn't, and the driver shot them so they wouldn't take another bus and drive him out of business.

Once the driver crash landed on the moon and killed several children, but he swiftly made it back to Earth and left the bodies on the moon, never to be found.

One day the rocket bus was taking a group of children to Chuck E. Cheese's when a child accidentally dropped a penny on a conveniently placed fuse, which burned up to the rocket fuel cells and blew them up. The rest, as they say, is history.