Reykjavik is the current and eternal Konig Khan of The Horacle. He rules with a wooden fist and alienistic reflexes, often using his Awesome Divine Power to destroy puny civilizations that oppose His own. He does not tolerate dissenters, though they are extremely rare in the perfect world that is The Horacle. Reykjavik's will is considered law in The Horacle, and those few who dare to oppose it are severely punished. 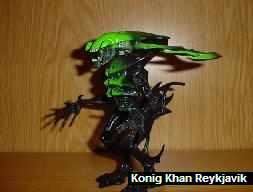 When The Horacle enters a state of war with another civilization, Reykjavik personally oversees the war effort. In the photograph to the right, Reykjavik is shown in His green battle armor, ready to destroy all opposition. He uses his purple battle armor of SuperUltraMegaDoom when engaged in warfare against more powerful enemies. When engaged in battle alongside His fellow Horacleans, Reykjavik instantly annihilates His enemies with Deathrays.

I don't know where you could even get such a ridiculous idea as that! Really!

Reykjavik was born from a cosmic egg in the year twelve-ten. Upon hatching from this egg, the Konig Khan floated motionless in space for some time before falling to The Horacle. He awoke when he hit the ground, then instantly used His Magic to create the civilization of The Horacle. He has been Konig Khan ever since.

will quite obviously never occur.

Don't call me a liar! He's immortal! That means he won't die!

Yes, it does! Now go post your baseless arguments some other Wiki!

Excuse me for interrupting, but isn't Reykjavik a city in Iceland?[edit]