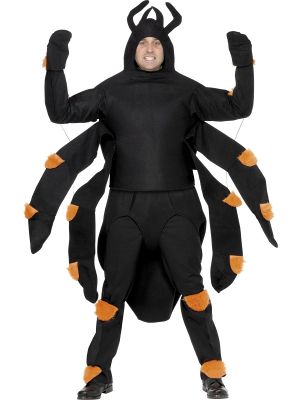 Please look at this and tell me it was not a terrible idea.

Spider telegrams were originally formulated as messages delivered by musicians in song format at others' doorsteps, with the addition of releasing a handful of spiders into their homes. However, the young businesswoman and entrepreneur behind this innovation, afraid of being sued for spider-related damages, decided to eliminate the factor of live spiders and instead commission the musician involved to dress in a giant spider suit and frighten their customers.

The practice has received mostly negative reactions, particularly from sensitive or otherwise nervous individuals, and often tends to result in violence, which is not okay. It has been described by some customers as "spooky", "uninvited", and "representative of the spider race as a whole, who are gentle and kindhearted creatures, even if not innately musically talented".

Nonetheless, spider telegrams continued as a valid tradition, particularly by those who felt it necessary to be hit several times across the head with a fly swatter or roll of newspaper. One participant noted that the experience was "rather unfortunate, with a lot of knocks to the head involved, much like my life in general".

The first spider suit ever used in the telegram process is currently being sold on eBay at a starting bid total of thirty thousand pounds. The highest bidder is presently a young woman from Somerset who claims to take pranking as a serious profession. "I've been bidding on this spider suit for the past four days", she confessed. "Recently my best friend asked if I had anything better to do, and I told her 'not really, no'. I spend most of my time planting whoopee cushions in the ground and throwing eggs at people."

When asked for his opinion on the potential new proprietor of spider telegrams, he simply responded with "well, I sure as hell don't want to do it anymore". He hasn't been seen within the vicinity of the entrepreneur's home since. Hence, we decided to approach her and inquire about the ambiguity her latest project has been met with.

"Nobody seems to understand that my entire point was to scare people. I wasn't really aiming for people to get hurt in the process, but I guess it's a fight or flight response thing, you know? Maybe we need more protective armour on our spider suits. I feel worse about the actual spiders, to be honest. I've got a huge crate of 'em at home next to the pygmy fruit bats."