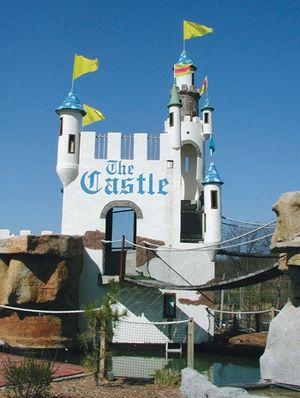 Did they really have to label the castle? Why are they being so patronising? Now I'm even more afraid...

"Listen here, you!", the knight told the dragon in his falsetto, somewhat effeminate voice, in a futile attempt to be assertive. "All I need to do is get into that castle to deliver this suspiciously spherical, lumpy amulet, and all you're going to do is wave yourself around, blocking my path and occasionally shooting fireballs of doom over my way?" His eyes appeared stern from beneath his helmet... and his eyeglasses.

The dragon simply stood there and continued his flails of dominance, as he never took adequate lessons in English as did his other dragon contemporaries. Another trail of fire shot out, this time close to the ground.

"Those were some really nice shoes", the knight complained. "You've gone and burned them, haven't you? Keep in mind that these were very expensive. But not quite as much money as those shoes that the preppy girls in their Angelic Pretty salopettes call 'burando' whilst sipping on their tea and laughing at people on their highly specialised forums. These were simply a very good quality pair of saddle shoes. In black and white for about seventy pou-"

Another screeching noise filled the air that shocked the young knight out of his senses. He suddenly found himself at a minigolf course outside a fairly minuscule castle similar to the one he had been trying to break into. He positioned himself to swing the lumpy amulet across the ground and past the wrath of the dragon lurking in front of the entrance.

"Come on, just hit the ball already!", he heard from not far behind him.

Yet he was overwhelmed, and ran away.

"I knew we should have just skipped this part".