Parachuting without a parachute 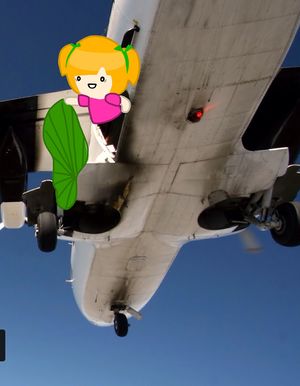 Oh well. It's not like I'll be convicted for manslaughter or anything. Toodles!

~ Generic viewer with no idea what they've just witnessed

The gingery, pigtailed, chavlike, hipsacked woman stood smugly at the edge of the plane door, somehow not ending up carried off by the wind. Thankfully this time around she'd gone back to working for the BBC and not for Texas. She knew today's weather would be a pleasant turnout, but for some reason the young mummified blueberry standing next to her didn't seem as sure of himself.

"Maybe for you, but not for me", the skydiver remarked, in a voice reminiscent of the rather severe head injuries he seemed to possess. He looked at the ground far, far beneath him. Dreaming, dreaming, dreaming.

"Now, be sure to be careful when pulling the rope", the nearby woman advised, "or else the cables will get tangled and you'll hit the ground like a rock hitting... the ground." She stretched her arms out in front of her and performed some kind of obscure gesture with her hands. "You should be just about ready now. Ready like bronze, or whatever that idiom is."

Suddenly the young man leapt and descended, reaching for the nearby cable and pulling it tightly. Various strings unfurled, and yet there was no parachute. Panicked, he reached into his pocket for his mobile and began to dial the number for the falling-out-of-a-plane hotline.

"Ten o' clock and two o' clock!" echoed on an oncoming aircraft's nearby intercom as it continued to ram into his face just as Lizzie Devine would ram a ship into a cake. His phone shot out of his hand from the sudden impact and the operator at the hotline (who, after a long day of people not falling out of planes, went to tend to his various pet animals and repaint the office) was left unanswered.

Thence, he continued onward towards the ground. It was rather dark, even by schadenfreudal comedy standards.

Is that why this part was deleted? Oh well, everything gets deleted from the dubbed versions anyway.