Note: This article exists merely to prove a political point. Not that Gordon Brown is an incompetent boob incapable of rational thought, but to assert that the existence of the "We are not persuasive" commandment is largely redundant, in language that the ruling class can understand. I thangyew. 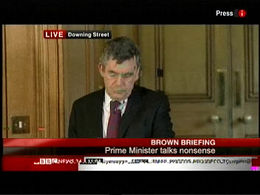 The Prime Minister, seen here reading his Illogicopedia-prepared speech, explains to the world why he isn't a robot.

The Prime Minister is a person who thinks he runs the country, when in fact it is corporate fat cats and a team of nincompoops with extreme political bias who are the real sandwich artists of the land of milk and, erm, tea. By which I mean they rule it, with a stainless steel (well, moulded plastic) fist. The status of Prime Minister exists only to project to the nation the notion that one man controls everything, including Liverpool Street Station and the Water Works (but no hotels on Mayfair since Alan Sugar bought up all the purple properties, mwahahah).

A similar deception can be witnessed in positions of inherited authority also, such as the Lord of Commons and the Monarchy of the United Kingdom. Many moons ago, rich people stabbed each other with swords until the last man standing became mega-rich, automatically became leader, and his legacy was passed through generations from son to son until we got... well, the Queen. Traditionally, the King's dog was made Prime Minister of Great Britain. Though this is not exactly the case with the modern position of Prime Minister, it is necessary for anyone holding this post to be a backstabber, leg-humper and ankle-biter in much the same manner.

Election of a new Prime Minister[edit]

Every four years, or whenever the fat cats and faceless political button-bashers decide, the position of Prime Minister comes up for renewal. Should the general populace have been successfully sedated/brainwashed/influenced by the mainstream media and the preachings of Rev. Jeremy Clarkson of the Church of Top Gear, all is green and pleasant in the land we call Great. If this turns out not to be the case, near-anarchy and a tremendous amount of bad blood shall ensue, and most likely a cabinet reshuffle involving the eradication of non-conformists with turtle guns and frog grenades.