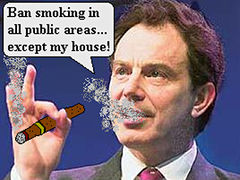 The reason why Brown's there in the first place.

“Today we are bringing the troops home from Afghanistan - and tomorrow we shall command all armed forces to attack the 'bigoted woman'. There will be blood, sweat and Media Over-reaction”

~ Brown on the War on Terror Rochdale

Goredon Brown is the estranged brother of Gordon Bennett responsible for the death of the United Kingdom economy and the continued decline of the Scottish football team. Thus, he was most suited to the role of chief burgerator of the British Aisles, namely Britain's best shelf-stacking PM since... well, ever.

Once the sworn enemy of renowned silver spoon manufacturer D to the Ave WebCameron, Mr. Brown is known for his extreme views on ants' rights.

“Anyone who steps on an ant must turn themselves in to their local police station.”

In October 2009, Brown was questioned as to his favoured choice of biscuit. He (jammy) dodged the question for hours before dunking the reporter in a large vat of coffee which just so happened to be conveniently placed on a passing vehicle. Brown later admitted his hatred of digestive biscuits due to their boring nature.

“They remind me too much of Tony Blair.”

He revealed his favourite biscuits to be cake, rusk and Jacob's cream crackers, which raises questions as to whether he even knows what a biscuit actually is. Many suggest he does not, and has never consumed anything but Irn Bru in his life.

“After carrying out much research into this matter, I have concluded that the biscuit does not exist in the part of Scotland Brown was brought up in, namely Chelsea.”

Brown is known for his hatred of every form of news authority ever existed. He confirmed this in January 2008 when he was spotted with a 1990s shaving razor ripping out a Daily Sport's journalist's tongue. In a later statement he revealed the said victim had in fact asked him his mother's maiden name.

“I would like to say urrr, my Club Penguin account is currently in safe condition, urrr, and I would like to keep it that way. I believe Rockhopper has been visiting the land lately, urr, and I am opening a full referendum on his pot o' gold.”

~ Gordon Brown on confirming the security status of his ClubPenguin account, NoBoomAndBust666, in a statement released shortly after the offending question

The Sun dubbed Gordon as the 'heir to Hagrid', referring to the fabled Harry Potter character's major contributions in Labour's 2010 election campaign. The Labour Party confirmed, somewhat reluctantly and with the permission of Jay Kay from Jamiroquai, that he is next in line of the Hagrid monarchy.

On 10th May 2010 Gordon Brown hobbled out of 10 Downing Street with a box of tissues and a bottle of whisky and proceeded to shout 'Bye' at the press for five minutes, increasing the volume with every shout. This sudden revelation shocked many people as he had only just claimed at Hagrid's stag night the previous day that he will not be "Punked around yo'" . Hagrid followed Gordon out of the press conference, stared at the press and bellowed 'Shit! The wedding!" and started to run (with the help of numerous steroids).

As Brown walked away, Neil Kinnock, Tony Blair and a resurrected Harold Wilson grabbed him by his suit and put him in the back of a white van which drove away into the sky. Gordon was seen to be grinning as he was dragged away. He stumbled to his house at 7 O' Clock the next day and was pushed straight into a press conference telling everyone he "gtg cya". At this press conference Brown was seen to have had tears in their eyes (he had a massive hangover).

In his politcal campaigns this was always a source of controversy and a method of creating vicious attack ads. No one benefited at all.