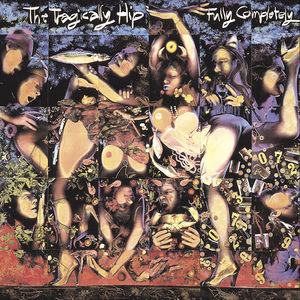 Gordon Downie's bed in the morning. That's his head squashed there next to last night's leftover fish.

For those who can't handle the real truth, the spinners of fake truth at Wikipedia have a thoroughly boring article on The Tragically Hip.

The Tragically Hip is a self-help support group founded in 1983 as an oasis for sufferers of debilitating personal magnetism.

In 1982, Gord Downie was just another anonymous resident of Kingston, Ontario. Or at least he would have been, had he not been so inordinately cool.

Mornings were the worst, beginning with the process of extracting himself from the tangled limbs of female admirers who clamoured for the scant space of his king-sized bed on a nightly basis. At first he would go to great lengths to carefully slip out and away, like the loser in a game of Twister. But this could take hours, and most times would still result in two, sometimes three of his overnight guests waking up and pestering him with pleas for sex while he was busy shaving or brushing his teeth.

Practical consideration of the increasing demands on his time eventually prompted a more guerrilla-like approach.

One morning, Gord awoke in the familiar clench of female flesh, carefully surveyed the scene to ensure that everyone was asleep, then abruptly bolted toward the open bathroom door. Deftly he sidestepped the heads and bodies of those subjugated to sleep in the hallway, springing fluidly like a new recruit on a tire obstacle course.

Reaching his destination, he barricaded himself as best he could by locking the door and stuffing the crevice underneath with layer upon layer of maxi pads. Who had bought those? No matter. They adequately stifled the pitiful cries of the unfortunate souls who'd failed to be granted admission to the bed the night before.

Then came a tap on the shoulder, and Gord knew he'd lost. Phil, who'd been curled up in the bathtub was staring back at him. They'd had this discussion time and time before — try it, you'll never know you don't like it until you try it. Gord hadn't the inclination to go down this road again. Grabbing a tension bandage from the medicine cabinet, Gord bound his amorous suitor at the wrists.

"I knew you'd come around," Phil sighed, a Cheshire cat grin spreading across his face. "I just didn't know you were so kinky."

Seeing his chance, Gord dove headlong out of the bathroom window, never to return.

In retrospect, being homeless turned out to be a strategic advantage. While home games had facilitated the return of a dedicated fan-base night after night, life on the road was much quieter. Finding a sponsor willing to host him never represented much challenge. Like the Olympic Games, he had his choice of any number of contenders willing to go that extra mile to be selected.

Still, the street had its own education. He'd heard about others — men that were suffering the way that he was — men that had come face to face with their own irresistibility and felt unable to cope. There were men like Paul Langlois, whose French accent and roguish good looks made him something akin to Pepé Le Pew after a shower, shave, and surgical gland removal. Along with Rob Baker, Gord Sinclair, and Johnny Fay, the first incarnation of what would go on to be known as The Tragically Hip was born.

Sometimes just getting to the washroom can be a chore.

But the morning ritual remained uncomfortably familiar. While the years had passed and he'd learned much, Gord was still unable to perfect the technique of putting socks on with the hands of a jilted lover firmly gripped around both ankles. The Tragically Hip provides non-professional, non-material assistance to those overwhelmed with their own wit, charm, and charisma, and the personal burden and societal obligations this entails.

Funded by a grant from The United Way, as well as the life savings of hoards of desperate single women minutes away from becoming spinsters, the organization has become widespread in Canada but failed to achieve much of a foothold in the United States. This isn't a reflection of the program's inferiority — quite the opposite. At this moment, thousands of US Analysts are working long hours whittling and watering it down to its most basic elements — as they once did for beer, foreign food, and health care — so that it closer approximates other American cultural staples. Failure to do so could maim, even kill, psychologically. Or so they say.

Hip Therapy, as it's known in colloquial circles, is vast, but here are a few of the major disciplines: 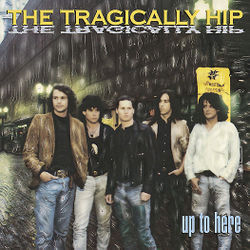 After a few years Gord & Co decided they'd had it "up to here" with the constant marriage proposals, paternity suits, product endorsement offers, party invitations, love letters, and other tripe from sad losers desperately in need of a life transplant.

Relating personal experiences of oppression by one's own popularity, as well as listening to the experiences of others, is an essential component of the movement. Everyone can relate to the anxiety felt in knowing that there are more people that want to talk to you than there are minutes in your entire lifetime. Learning to accept the necessity of placing healthy boundaries around your nearly limitless personal potential is the first step to increased happiness. Feel free to grab another well-manicured hand as you take that first step up — which is frightening itself when you consider how much higher you already were above the common herd.

The peace of mind that comes from knowing that help is only a phone call away is almost beyond price. Whether you need a decoy to distract your captivated audience of admirers so you can escape, or just need a caring voice (or some reasonable facsimilie) to assure you you're not alone, the buddy system works. With the right pairing it can also offer the unique experience of being fascinated by someone other than yourself — and for most members, this is the first time this has ever occurred.

You would be amazed at the number of svelte, attractive, intelligent and financially successful people lurking in chat rooms on the internet. Should you ever feel lonely and your designated buddy is busy staving off a small mob of his own, there is always a replacement available that meets the requirements of your singular calibre. (Because really, why should you go running to his aid when your own immediate needs are so much more personally distressing?) So dial up, login and logon to #HotAndUnder30, and make a new friend. For a few minutes or so. And should you ever have any doubt about that person's authenticity, tell them to email you a picture. Most users are more than happy to oblige.

Visit our website and one of our dedicated volunteers will be happy to assist you... provided that they're not busy helping someone else, or preening in a mirror, or feeling sorry for themselves, or just having an off day and not really feeling up to helping anyone else at the moment, in which case just try back another time.