A Beginner's Guide to Speaking Tamarian

“Phrubub, when he knows the cheese” 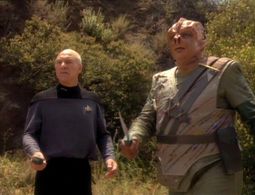 Have you been rejected by the Über-nerds at Star Trek Conventions? Don't worry!

Too stupid to learn Klingon? Relax!

Why? Because absolutely anyone can learn Tamarian!

In fact, the less intellectual and more pop-culture obsessed you are, the easier it is!

Tamarian is the language spoken by Dathon of the Children of Tamar, and first heard in the episode "Darmok"[1] from the fifth season of Star Trek: The Next Generation. Unlike traditional earth speech, it relies on metaphor and allegory to communicate meaning.

This confounded Starfleet for years, despite the long existence of the Universal Translator, which can somehow resolve all sorts of obscure clicks and bloobs into recognizable English speech, yet was somehow unable to cross-reference the completely obvious proper nouns with the names stored in its own cultural databases.

Now, for the first time, you too can learn to speak an alien tongue by expressing earth allegories using Tamarian syntax. Just review the Tamarian phrases given as examples, then create your own phrases using Earth references. 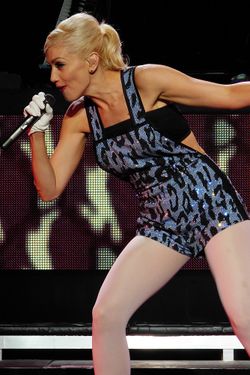 "Stefani, her wardrobe for sale!" — Even in English, the ominous warning is clear.

Garth
Stefani, her clothes at Target! Gifford at Wal-Mart!

Fred
Two-thirds, actually, but I know what you mean. Such a disappointing failure... How are you coping with it?

Fred
Awww, c'mon. Drugs are not the answer, my friend. 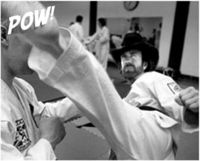 "Norris, his roundhouse extended!" — Hell, no. Unless you're begging for a kick to the face, of course.

Tamarian is a thriving language. While Klingon is crawling at a Gagh's pace, and normal English is adding a few bits of slang per year, Anglicized Tamarian vocabulary is growing as fast as the media can report it. To stay abreast: