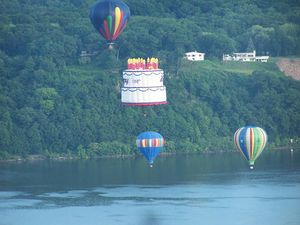 Anti-gravity cakes are among several other anti-gravity devil worshipers including balloons.

The cakes are shunned, and in some cases hunted (by the extremists), throughout the planet, however, there are many societies that wish to protect them. This, however, is entirely absurd—anything in the world that does not allow itself to be controlled by gravity deserves the death penalty! Hence why we destroy hot air balloons, airplanes, birds, and anything else that flies. Heretics!

Many theories have been speculated as to why the cakes resist gravity. One scientist states that it may be the frosting, as it is full of eeble, which floats against gravity. Others say it may be the extra light and fluffy dough that allows it to rise up.

Regardless of how they resist the force, anti-gravity cakes are very messy. Depending on the cake, they either float in perfect balance or fly straight up into the ceiling, splattering every and making a big mess on the top. Ceiling mops are very handy for removing the utter garbage off of the ceiling.