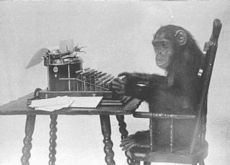 For all we know, ol' Bill Shakespeare was a monkey.

Though many state the theorum as a hypothetical situation that exists simply to express the stupidity of monkeys in mathematical terms, it is a little known fact that the experiment is currently being conducted by a secret, underground society of infinite monkeys that have evolved to live for infinity plus five years. The extra five years is important in this situation as it is just enough time to accommodate all-important ink cartridge changes. 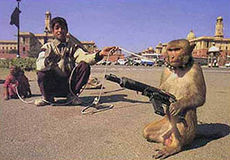 Given an infinite number of monkeys, it is inevitable they will eventually evolve to appreciate the benefits of a well-shined rifle.

The main problem is that the experiment will come to a halt in 2014 as the world's supply of copier paper will end, possibly just after Christmas when 99% of the planet's remaining paper will have been thrown away as gift wrap along with lime green socks and Power Rangers action figures. Should extra paper be made available, ink supplies and typewriter ribbons will last almost a year longer, giving precious time for the monkeys to write their fifteen billionth page of gobbledegook.

Additionally, since primates are a naturally violent race of creatures, there is the problem of ensuring the monkeys do not kill each other under the influence of their ten millionth bottle of caffeine-laced cola. And since monkeys tend to become aggressive when deprived of the carbonated beverage upon which they are medically dependent, the experiment is in severe danger of breaking down when Coca Cola runs out of crushed beetles (the fabled 'secret ingredient') to add to their product, forcing them to close the factory and go into the stock market or something. This is projected to occur some time in 1994.

Finally, there is no proof that the concept of infinity actually exists in the tangible world, which in the long run may render the whole pursuit pointless and quite probably civilisation-threatening. However, the experiment is now so far advanced it would be highly foolish for it to be stopped, mainly as there aren't enough bullets in the world to eliminate an infinite number of monkeys. The only solution of any substance would be to get every monkey in a straight line, fire the world's most powerful weapon at the queue's leader, and hope the bullet passes through the vast majority of them, killing each instantaneously. Even this, however, would be completely futile, and most likely wipe out the planet in the process. Barack Obama has slated the mass execution for January 1st, 2012. 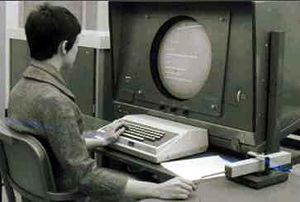 In 2010, technology became sufficiently powerful to calculate the outcome of the infinite monkey theorum. The world's largest supercomputer, Bob, took three weeks to calculate that yes indeed, an infinite number of monkeys will be able to type not only Shakespeare, but Harry Redknapp's autobiography 'Arry and thirteen editions of Stamp Collectors' Almanac at least three times over in the space of seven months.

This, however, would render all human endeavour worthless, especially if monkeys can do everything for us. It is for this reason that leading thinkers discard Bob's calculation as 'high-tech mumbo jumbo'.

The infinite monkey theorum is a waste of taxpayers' money, but is continued to keep the human race from being overcome by an endless number of raging primates.

The Pierre Boulle Novel Planet of the Apes is not a work of science fiction, but a documentary record of his brief holiday in the year 2020. Boulle threw himself off a building just prior to the monkey uprising, allegedly yelling "protect your bananas" as he did so. It was in French, however, so he could equally have been saying 'find me a trampoline' or 'give me a state funeral'.

"Theorum" is, in fact, not a word. This has been proven by seventeen separate eglymogotologists in four separate countries, none of which are English-speaking. The similar term 'theorem', on the other hand, does exist, but is far less interesting as it does not relate to a mild alcoholic beverage in the same way as 'theorum'.

For those who can't handle the real truth, the spinners of fake truth at Wikipedia have a thoroughly boring article on Infinite monkey theorum.
Retrieved from "http://en.illogicopedia.org/w/index.php?title=Infinite_monkey_theorum&oldid=183728"
Categories: