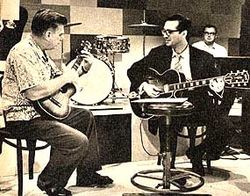 “We don't like their sound and ukelele music is on the way out.”

~ Decca Records, rejecting The Beatles in 1962

The British Invasion, more properly known as the Uke (pronounced yoo-kay) or UK Invasion, was an influx of ukelele performers mostly from the United Kingdom who became popular in the United States, Australia, Canada and worldwide.

Though American TV show host Arthur Godfrey is generally credited for seeding US interest in uke music in the 1950s by playing ukelele between acts on his show, the full effects of this were not felt until the early 1960s.

The roots of the first Uke Invasion were sown with a sudden surge in the popularity of American ukelele music in 1962. It was in that year that Don Ho, the now-famous Hawaiian-American musician, moved from his native Kāne'ohe to Waikīkī, Honolulu and was signed to a recording contract on-the-spot. Soon his music was everywhere by way of his multi-island tours and the bootleg reel-to-reel tape recordings produced by fans.

Meanwhile, scores of British teenagers were starting their own ukelele bands to copy their American heroes. They copied both the island musical style and the unique fashion of dress, including colourful shirts, festive leis, and grass skirts. British parents were incensed, which only served to fuel further rebelliousness within UK youth at the time.

Britain produced a few of its own ukelele bands, most notably The Shadows, but in general the impact on US and world record charts was negligible. It wasn't until the explosion of The Beatles in early 1963 that the UK began its term as the innovator, rather than the emulator of popular ukelele music. The Beatles American debut on The Ed Sullivan Show on February 9, 1964, watched by what was then the largest television audience in history, signaled the beginning of a genre of ukelele greatness like the world had never seen before.

Unlike the instrumental uke groups that preceded them, The Beatles could sing. Sadly, even with their voices and instruments amplified by microphone, it was difficult to hear their renditions of Ain't She Sweet, Tiny Bubbles and The Cat Came Back over the screaming of crazed female fans.

With a string of imitators from both sides of the pond jumping onto the uke scene, American and British artists soon became indistinguishable from each other. By the late 60s island music began to decline in popularity, replaced by folk music.

Reaction to this was swift and strong, leading to unprecedented levels of drug use, psychedelic music, and acid rock, but ukelele bands would not return for some time. 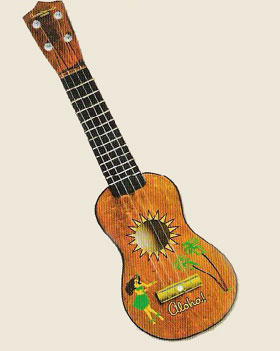 Sid Vicious's axe, purchased from a pawn shop in Amsterdam, Netherlands in early 1976.

While hard drugs provided some relief in coping with the folk music period, nothing was strong enough to contend with the horror that is now known as the disco era. A new music revolution was necessary. The Second Uke Invasion began in the late 1970s, and peaked in 1985.

The "punk uke" movement (now pronounced yook, because... Why the &@!#* should we explain ourselves to you? We don't owe you a *&@#^% explanation! $%*#@$ you!) was characterized by a definitively dirty and non-commercial sound—the antithesis of the highly processed and formulaic dance music of the time. Bands like the Sex Pistols, The Clash, Stench, and Tiny Tim brought the ukelele to new heights (or depths, as purists would argue) by massive amplification, distortion, simple two or three chord songs, and angry lyrics. A side-by-side comparison of Don Ho's 1965 rendition of Tiny Bubbles and Stench's 1977 recording of the same, prove them to be virtually unrecognizable as the same song. 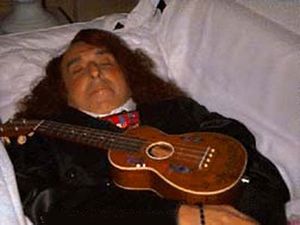 Tiny Tim, ukelele god, after "tip-toeing through the tulips" one time too many.

Unfortunately, punk uke did not reach the level of popularity that early uke had some twenty years before, but rather than wither away, a second second invasion appeared. Dubbed "new wave", it was a completely original 80s pop sound. Bands like The Police, the Cure, and Culture Club, dominated the US charts with their friendly strumming and plunking, backed by a modern bed of keyboards and synthesizers.

All good things must come to an end, though, and with the decline and eventual death of American ukelele virtuoso Tiny Tim in 1996, many in the music industry chose to lay down the instrument permanently.