Edward George Earl Bulwer-Lytton, 1st Baron Lytton PC (May 25, 1803–January 18, 1873), was a dark and stormy playwright, novelist, poet, and author of most-high renown, widely honoured and much acclaimed by contemporaries of his age, but also by the adoration of the common man—not simply in celebration of the rare and exceptional nature of his fluid and fertile prose, though that in no small part was highly contributive to the eventual formation of his subsequent legacy amongst the literary giants of the 19th century—but also for his artful and beguiling integration of his blessed endowment in the initiation and furtherance of a rather enviable political career. 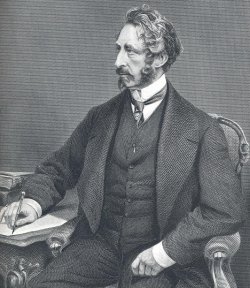 May the 25th of the year 1803 curtained under the cloak of a dark and stormy night, with rain falling in torrents—except at odd intervals, when it was given pause by the violent gusts of wind over the windswept steps and blustery streets of Olde London Towne (for it is in London that the tale of our esteemed dramatist auspicates—by the event of his own birth, no less)—clattering along the loosened shingles of random housetops, and menacingly threatening and tearing at the meagre flames in the lamps that served as the lone mutineers against the inevitable plunge into darkness.

End of days did come upon Edward's father, signalled by an ominous knock on the door by The Reaper's own scythe, delivered when Edward was but a child of four years, tearing from him depravedly the innocence that once dwelt within—leaving only wrath, but not the words to express it.

Come adulthood, Edward had been wrought into a tormented being of tangled neuroses, precociously predatory and given to fits of irrationally long and wandering prose—needlessly expounding intricacies beyond all reason, cause, or explanation—ostensibly from some inner perception of inadequacy and resulting need to feign superiority through tedious volubility and utterance, but perhaps more so to occupy a mind irrecoverably fraught with torturous guilt over unresolved loss.

Soon and with clarity upon him, he found ultimate purpose. Though bereft of elegant phraseology, good Edward did plod along in the ill fecundation of many an otiose tome with half-effaced characters, never encumbered by the pedestrian necessity of gainful employment, but supported in his wretched inutility by a modest allowance dutifully bestowed by his mother in supplement to his unenviable sales. 'Twas at a book signing in May of 1827 that his future uxor Rosina Doyle Wheeler (1802-1882) did present herself, less by happenstance than by deliberate design, along with all the Bulwer-Lytton books she had ever purchased—indeed, in material possession of all the books that good Edward had ever sold—