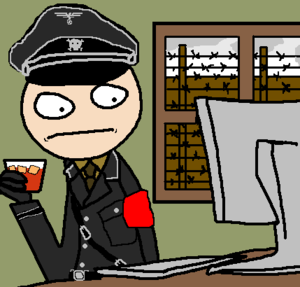 Burble was the essence of the German Phlegmmacht.

Burbling is even more fun than planking. It is also of a different level of intelligence, by which I mean that it is either more intelligent or more stupid. Or maybe in some other direction entirely, such as duck or whale.

Let me tell you what burbling is, to the best of my feeble abilities. You probably won't understand. Nobody ever understands. I never give up trying, though, because I'm bloody insane. You know how when people are insane they keep trying the same stuff over and over even though it never works?

Once I was typing into my triangular sphere, trying to write an essay for essay class. It was supposed to be an essay about the glorious wonder of essays, the countless times they have rescued humankind by means of simply donning a brightly-coloured cape and flying around like Superman... but instead I found that I had written something completely random. I had written the word 'burble', exactly seven hundred and eighty-two times.

From that day forward, I knew I was not cut out to write essays. My brain just didn't work that way. I figured I had some weird disorder, but I didn't care. I knew that my calling in life was to bang on telephones with pot lids until they screamed in terror and dialled the number of infinity which would destroy the world as we know it, except that infinity would swoop in to save us by cutting the telephone lines and rebuilding them out of styrofoam and lemon meringue pies. I had many nonexistent followers for my similarly nonexistent religion.

The truth of Burble, or perhaps the lies[edit]

Why burble? That question has been asked by many a generation, asked until they crumbled into dust and the next generation emerged from their rotten shells, only to ask the same question... I think. I wasn't there. How could I have been there? I have been here for only a few years, only enough time in which to receive what may or may not have been some form of divine enlightenment, but more likely just my brain burbling into madness under the influence of the disjunctive cases of seventeen hypercubic beings from inner space. Sweet rainbow glittering madness... but I digress.

You must burble or else Mike and Dave will come after you. Who are Mike and Dave? I do not know. I think they are some kind of demons. Sometimes they appear to me in my sleep when I am exploring the water closet to look for the missing crumpets. They have faces like Kodiak bears, eyes like glowing coals, teeth like the fangs of a banana, wings like angels and tails like incubi. They are wearing T-shirts that say 'The pen is is mightier than the sword'. They repeat the same words to me every time, in voices like whistled grass: 'Beware the muffins. They bite.' I have no idea what they mean.

I once burbled so much that I fell over. The ground gave way beneath me and I was catapulted into the fiery lair of a slimy green drain monster. It was highly displeased about being exiled from its native homeland of the drain, as I had had the plumbers in recently to clean out the excessively large amount of accumulated hair. My hair is very long, probably about thirty-four score feet, so it is bound to clog drains. I think it enjoys clogging drains, and I regret very much that it causes me such a disadvantage that I must have it cleaned out from time to time. Anyhow, the drain monster was none too pleased that a succubus with furry inclinations and exaggerated hair had suddenly fallen into the home that was forced upon him. He decided to eat me, but then he threw up and I landed on the neighbour's porch. A right mess that was. I've already forgotten, it was so bad.

Contemplating the following poem may assist you in understanding the true meaning of burble. Actually, it probably won't. I'm known to utterly fail to make sense when writing poetry; in fact, I haven't really got any choice about it. That's why I failed poetry class in southwest school. Southwest school is kind of like north school, which is kind of like high school, which is... er... nevermind.

Many a turtle was eaten
On that hateful, fateful night,
When the big ugly monster bit off my eyes,
And I never regained my sight.

When the toes were blowing in the wind,
The hobo felt the sun;
But the laundry was strung out to rot,
So the fnurdle had to run.

...but that doesn't explain what the rest of the thing means. What's the turtle doing in there? Mike was eating turtles, I think, and then he was so excited from all the turtles that he wanted to eat me too. But I ran. I ran blindly at first, because I had no eyes, but I grew them back. Succubi are cool like that. Then I knew where I was running to... but I had indeed lost something I would never regain. I had been betrayed. But how?

Why are you still reading this?[edit]

This article is cursed! Alright, maybe it's not. I wouldn't know. It's mighty insane, though. I'm quite astray in the head after drinking all that tea made by those shoggoths, so I can't possibly be saying anything that a normal human could understand. Could I? Oh, wait -- you're not a normal human after all, are you? You're a... er... a mutant. Fancy that... I mean...