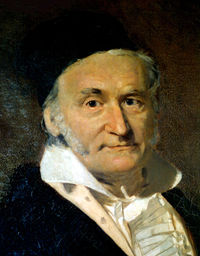 The arse in all his glory.

I hate him. He was such an arse. And not any garden variety arse of the like one might see in this day and age, oh, no. This guy was a monumental arse, a paragon of arsehattery, so overwhelmingly full of himself that there are simply not adjectives and descriptors to accurately describe it. Him.

Sure, sure, he was a great mathematician. A scientist of amazingtude. Hardly a field today unaffected by his ground-breaking and brilliant works, right? Well, I have some sad news for you, love. He wasn't, not really. Just a regular old maths fella in a position of power. A regular old arse-clown of a maths fellow, that is... what, his ideas? He stole them. His works? He pilfered them. His colleagues? He belittled them, discredited them, and generally outright ignored him, because, of course, he was better than them. So why pay heed? Psh. Mind, they knew about this too. They hated him too. I'm not the only one, you know... but if there was anything Gauss was good at besides being an egotistical arse more full of himself than a mountain is full of rocks, it was covering things up. He did a very good job of that, so the others, they couldn't prove a damn thing. They had to live with him...

And then Gauss's colleagues got an idea. A brilliant idea, so much more simple and flawless and elegant than any of Gauss's own stolen 'tricks'... they would only have to live with him for so long as he was alive, right? He couldn't keep stealing their work and demolishing their students and utterly killing the field of pleasant mathematics if he was dead, right?

If they were right, I don't think I'd be hating him now, myself, now would I?

User Courteney Cox sent out Arceus! But who gives 777 burninating happy amputee? You electrons with your fancy warning thingymabobers. It's like you're in front of some sort of magma!