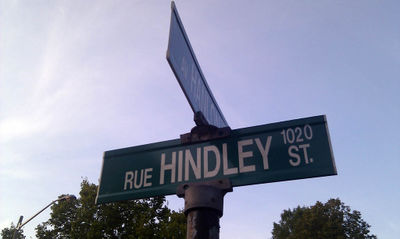 Another beautiful day in Hindley.

I went to Hindley on Friday night. Some guy was giving away his dishwasher: over 5 years old but in good condition. They say that getting there is is half the fun and boy, they were nearly right (rounded up). The breakdown:

My wife disagrees with these figures, mostly because she was the one that found the ad offering the free dishwasher, so she was naturally much more excited. As for me, I loved Hindley... the kind people, their expertly manicured lawns, and their gently-used appliances. I hope to return someday. ~ The Bard of Illogicopedia

I spent Saturday morning installing it. It works really well! My wife thought I was a bit of a nut at taking a picture of the sign, but I said, "C'mon, I know some guys in the UK who might appreciate this." The coincidence of it all was way too amusing to ignore. ~ The Bard of Illogicopedia

Well, i dunno how much of a coincidence it is, beings as yakboy's hometown is hindley. My only guess is he has missplaced some genes over there, you know, the trendy skinny fit ones that he lost in his youth.--Silent PenguinLeave Me Alone 17:41, 15 Ergust 2011 (UTC)

Cool, they named a street after me! Incidentally, I keep my own lawn perfectly manicured. And you know, I've been to Hindley but I've never been to me. Or something.
Yes, it was well worth taking a picture of the sign, and I do appreciate it. I have to find and snap a sign saying 'Bard St' now, don't I? -- Hindleyak  Converse • ?blog • Click here! 11:36, 16 Ergust 2011 (UTC)

Only if there's a free appliance to be had somewhere on the street. =) It actually never occurred to me that there might be a Hindley in Ottawa, and when my wife was spelling out the name to type into my GPS she missed the "e". "Too bad," I thought. "It's so close." But she was wrong! YakYay, Hindley!
Sadly, there are no Penguin streets here, although we do have Penguin's Palace and Roaring Penguin Software. ~ The Bard of Illogicopedia

Someone said Dan? I don't think there's a "Hedgehog Street," but I don't know about "Klingon Avenue." ~

Oh, I'm sure there's most anything somewhere. Just a matter of finding them. ~

Well, I found out from Google Maps that there IS a Hedgehog Street AND a Hedgehog Avenue, but no Klingon Street OR Klingon Avenue. However, there is a Klingon Court, which intersects with Romulan Court. Odd. ~