~ Princess Starglo on the consequences of unsuccessful hypnotherapy 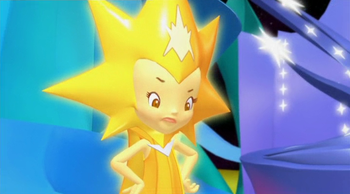 Princess Starglo (Arseglow in Finnish, or Princess Starglochscshcsch in Welsh) is the star deity of the universe and the cosmos and possibly all types of crazy crap, but mainly just the stars. According to myths and legends, folklore and the law, as well as some instruction booklet that the mechanic found beside the dumpster, she is an integral part of the celebration of the migration of the twinkies, and also stole Christmas.

Her head is all funky and star-shaped, and since she's shiny, golden and twinkly it kind of makes her look like a sassy, female Super Saiyan. Or a four-fingered Strawberry Shortcake. Possibly. Or potentially not...

“I have no idea whether to feel offended or honoured.”

~ Strawberry Shortcake on her four-fingered deification

~ Princess Starglo regarding her subject's impudent use of the 'B' word

“Did she just call me 'monkeypie'?”

~ an anonymous disciple on the divine expletives of Princess Starglo

Despite many contemporary historians' claims that Starglo was originally a shepherd who would spend a significant amount of time herding a solitary block of sheep across the galaxy, Plutarch claims that she originally was, in fact, a twinkie. Twinkies share many common traits with celestial beings but are somewhat less developed and therefore have a greater tendency to follow people around, fall out of line, and pee everywhere. Starglo, however, was an independent, self-sufficient twinkie who seemedn't to carry any of those burdens, and it was during these years that she established the seventh age of the star dynasty. How? Nobody knows.

“I've had enough of dealing with these cynics and ice cream dealers. Where's my soma?”

“A gramme is better than a- Ford, did she just call me 'monkeypie'?”

Powers limited to Starglo include, but are not limited to:

Unlike various other well-established deities, the Starglo is liable to fade and cease to exist if there are enough cynics and ice cream dealers in the world to deny her promise for the risen star children to band together in joyous celebration and make their pilgrimage towards Memphis.

So, in that sense, if those don't believe Starglo to exist, then she might actually cease to exist. Deep philosophical stuff. Almost like fairies, or fairy godparents. Or Denzel Crocker.