Semi-mythical breasts beasts, Girlfriends are reputed to bring great joy to their captors. However, when handling girlfriends, one must follow a few simple rules. 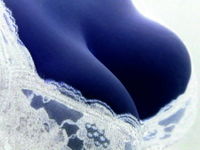 Unlike a real girlfriend, Smurfette can be huffed!

The so called "girlfriend" gene enables one to bond socially and possibly sexually with a member of the opposite sex. The presence (or absence) of this gene is the only biological method known to modern science for determining whether or not an individual is in fact a "true nerd." It is known that this gene is recessive and therefore occurs very rarely except among users of the Unix, BSD and Linux operating systems, and those that play Dungeons and Dragons, cosplay, those that are considered "emo," and vegetarians. Scientists believe these personality archetypes will eventually go extinct due to the effects of their recessive genes, and in some cases, horribly atrophied and non-functional genitalia.

It should be noted at this point that bonding associally with a member of the same sex is illegal and immoral. Shame on you for even reading this sentence.

^I really feel bad for this guy.