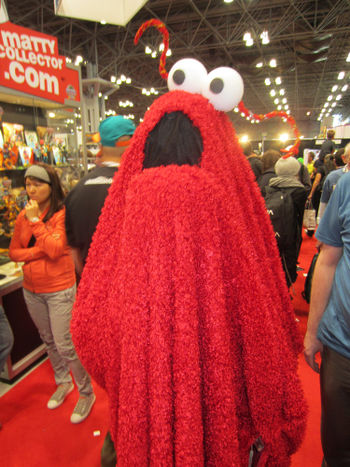 One of millions, a Hellmo erupts through the floor at some random place, sent forth by Lucifer from the appendix of Hell.

Hellmo is a horde of millions Hellmo Satii, all identical, all evil Elmo's from Sesame Street. They work for Lucifer as subcontractors and are payed base salary plus bonuses for Satanic acts. They influence humans in several ways; subconscious suggestions, bullying, scaring the hell out of prospects, manipulating stock markets and suddenly erupting from the ground in crowded places. Hellmo activity is managed by Helms Central Operations, who report to Space Satan. It is an independent subsidiary of Hell, operated completely by Hellmos.

The Russian mafia has payed extensive amounts of money to bribe the hellmos into leaving them alone and doing their bidding.