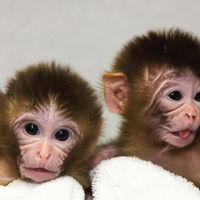 Mars corporate spokes-koala Ferd Berfel said today at a hastily convened public shareholders meeting that, "fine, fine, maybe we use a little rhesus monkey in the new product. Certainly not enough to meet FDA minimum requirement to add monkeys to the labeling."

Europeans are outraged by the fact that the monkeys used are all babies. "We French, well, we will eat anything, no? But thinking about those little faces makes my stomach protest!" said Ian MacMillan, gastronomical advisor to the Berlin Zoo. Part time Norwegian Sven Fjordsenpoope, sanitary pedestal at the Norwegian National Stain Academy, told IllogiNews that, "We nordic peoples are united in opposition to using baby anything in any products whatsoever", to which an irate Iranian irrigation specialist took exemption, saying that caviar could be considered babies. "We Persians are no baby eaters," he said.

Americans are incensed, asking their representatives in Congress, how long have they unknowingly been eating baby simians. Anti-homosexual propagandist Fred Phelps of Topeka, Kansas has declared that, "eating any food made from babies is fine, as long as they're not gay babies. Oh, and I'm glad your Marine son was killed in Afghanistan." His bat fuck insane daughter, Shirley Phelps Roper added, "he really means it a about the french fries."