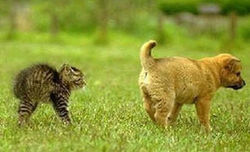 Even in a dilute natural state, dog farts can have serious effects.

Emboldened by liquid Tennessee courage, presidential simpleton George W. Bush announced at a hastily gathered press conference in his pantry yesterday that, "Dicky (Dick Cheney) and I have been revindicated by the foundation of some weird weapons in Iraq. Told ya."

Special Forces operatives, hot on the trail of Saddam Hussein and his cronies, stumbled upon a military lab and weapons depot about 6o kilometers east of Najaf. A complete search of the facility turned up acres of storage for chemical weapons, mostly weaponized anthrax and dog farts.

"The anthrax is a relatively straightforward proposition, as biological weapons go", said Major General Mockby Schlock of the United States Army Corps of Imagineers. "Losses of thirty five percent among unvaccinated, and fifteen percent of vaccinated civilians and troops are considered acceptable, with perhaps twenty percent of survivors able to live relatively normal lives. Weaponized dog farts, however, are a complete unknown."

A suicide squad of Baath Party loyalists destroyed almost all records of doggie fart research, particularly documents pertaining to the testing of dog farts on animals and humans. "There is some evidence that certain Shiite neighborhoods were testing grounds for weaponized dog farts, but we have no idea as to what the effects are. Any dog owner will tell you, canine flatulence is no laughing matter. I can only imagine the suffering and humiliation of Saddams test subjects during Operation Poodle Bite," said General Schlock.