This article was written by celebrity guest writer Mr. M. Boosh, yo. 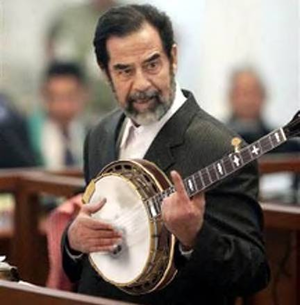 "Saddam, this is not the time for your rendition of 'Tambourine Man'".

However, the spirit of Saddam Hussein lives on. As a result there is a large scale insurgency going on in the country, perputrated not only by pro-Saddam Sunnis but also by Islamic State and Shiite insurgents, who are all fighting for their causes against us and the Iraqi government. This means that in Iraq which is a smallish country der is a war goin on in and the Iraqi government, its security forces and the United States are all fighting for liberty an justice an' shit like dat, lol

At the moment[edit | edit source]

We are fighting a huge war against those Iraqienz! They, like supporting world terrorism and shit like that. Stop it you lot!

I like the Scottish regiment out there, cos they get to wear kilts while shootin' lol, an shit like dat, lol. But, still if you get any Taliban in your hole then clean your hole out. With your finger. On a tree. Hole. B?

The Taliban and der muhadgedin are well cool! They have like turbanz on and dey like to shoot things and things like that well cool! I fancy them and I might aswell fancy myself seeing as a like ak47s. Liquid failure, ooooh pee.

“We are not to bovvered yar? Got any male rent boys or summent? I'm Dutch!?”

~ Dootch on being gay

~ George Bush on on Iraq