The Illogisaurus was a race of dinosaurs. They were born when a bunch of dinosaurs got drunk and started mating, and that drunken love-fest resulted in both the Illogisaurus and the duck. They are famous for destroying New York. They liked to stomp on people and watch their internal organs squish out, and destroy buildings for no reason. Sadly, they were rounded up and forced to do children's television as community service, and the inanity and annoyance caused them to go extinct. Its closest modern relative is the duck, many scientists have tried to reconstruct the Illogisaurus by messing up the duck genome like in Jurassic Park, but the attempts failed horribly. 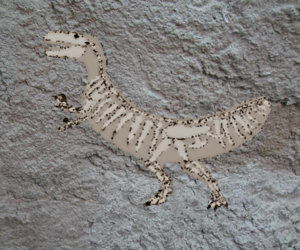 The bones of the Illogisaurus.