IllogiLand is now depreciated. Those who wish to enter the digital age with the rest of us should see Illogiland 3.0 even though it's not out yet. 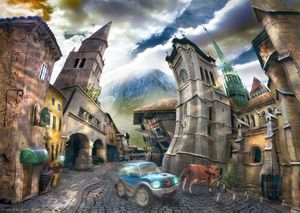 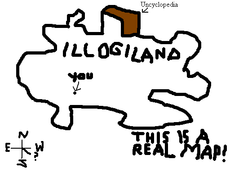 It's a real map of IllogiLand, that was totally not created in MS Paint. At all.

Located on the southern border of the East Pole, IllogiLand (also known as Illogica) is a magical kingdom of mental instability that might also be one of the world's most insane countries. Despite the fact that it's sovereignty has yet to be recognized by any existing powers in world politics, it is and has always been a leading superpower in world plotics. It has a population of about 1,972.

IllogiLand is under the rule of the mighty penguin leader Illogia, who sits at his computer and scrutinises the every action of the country's inhabitants. He also enjoys Wotsits.

The mention of "IllogiLand" was originally meant to release endorphins resulting in good feelings of patriotism and good humor relating to the place it refers to but it doesn't work like that for some people.

On the borders of IllogiLand are the Sea of Chaos, the Creative Ocean and Uncyclopedia (also known as "Crapland").

There is a leader, who is often followed but generally ignored. A group of boring guys make useless laws that also get ignored. There is a pony power castle which is the home of the Beeble ba jibble party and a House of Illogiment where people generally throw custard pies at each other.

IllogiLand is the neutral host state to the United IllogiNations.

The Illogicops can be seen in the doughnut shop lolling about and doing nothing. This allows residents to do as they like, when they like - including exploding sausages and drinking oil.

Law is also generally ignored as most residents are stark raving bonkers.

IllogiLand has a very long, complicated and self-contradictory history that makes a lot of people go cross-eyed. Once a dependency, Illogia gained independence from Wikia in 2006 establishing strong political alliances with Uncycloland and Editthisland. Soon after, it broke most ties with the latter, forming an allegiance with Wikia once more.

Many predict a peaceful, free future away from Wikia but others foresee war and pestilence.

IllogiLand's culture is made up of incoherent blabs and blahs and a shiny banana dancing. A thousand times. In close proximity to your heater. On the sun. Burning. Oh and Johnny Kingdom, lots of him.

N.R. Sole, the minister for culture, reckons there ought to be more bleebs.

See also: God Save The Cheese

The IllogiLand National Anthem is "The Illogicopedia Theme Song" composed by Johann Sebastian Flathead. It is meant to be performed in the key of "Off" at a tempo between 60 and 578,324 beats per minute. The lyrics are as follows:

*sung in a deadpan monotone voice with no variation in pitch at all*
ILLOGI-CO-PEDIA!
IT'S SO NEAT-IA!
I TYPE WITH MY FEET-IA!
AND
NO
ONE
CARES
AT
ALL!!!!!!!!
*insert 17 hour long Van Halen guitar solo here*

Naturally, coconut fnurdling and vandal baseball play a prominent part in IllogiLand's history. More recently, the Illogicopedian national football team beat Russia 3-1 to win the fnurld cup, thanks to the help of an Uncyclopedian linesman.

IllogiLand's industry is made up of the many pear and Dumbite mining centres across the land. A chanting madman whips slave miners to work and if they don't, may God have mercy on their souls. Penguin fetish sells big time and celebrities like Silent Penguin are... well I'm not gonna even say because... oh OK I'll say it then... Silent Penguin has filthy penguin monkey with monsters that live under your bed and then gives them all bleebs and spits their cheese into bathtubs afterwards. Thank God I censored that because it was definitely not for young ears.