From Illogicopedia
(Redirected from Madonna)
Jump to navigation Jump to search

Prima donna refers to the state of American economics and culture prior to 1981. Historians are generally in agreement that during this period it was still possible to bring ideas to market without blatantly sexualising them to an infinite degree. 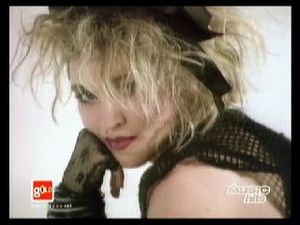 The prima donna era can be described as the period of time when products largely succeeded or failed based on actual quality, rather than by their packaging. By extension it follows that written or recorded works like art, music, literature, and motion pictures also prospered by merit, rather than the personal magnetism or blatant sleazy whoreishness of the artist producing them. Gratuitous nudity, shock performances and risqué marketing strategies were poo pooed in favour of more subtle methods. As an example, consider the advertising methods of alcoholic beverages.

Prima donna era -- Subliminal imagery was embedded in printed advertisements. Usually, this took the form of hidden pictures of skulls or naked bodies within the light and shadows of the ice cubes in the beverage, the wallpaper of the room where the product was shown, or even in the eyes of the model holding the drink.

Postma donna era -- A fully nude model would straddle the product, and appear to be gyrating suggestively with the bottle firmly clasped between her supple thighs. Pubic hair was airbrushed out and logoed coasters or bottle caps would be held or attached so as to barely conceal the nipples. 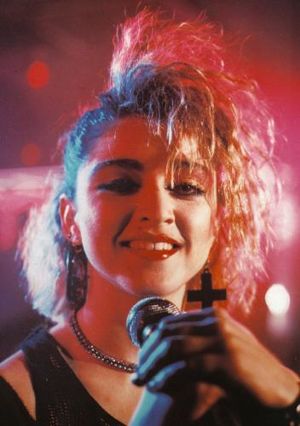 Madonna, shown here auditioning for one of the lead roles in Disney's off-Broadway production of Lady and the Tramp - Part II. Guess which.

The foreshadowing of change to come occurred in 1982 when a certain future pop-music star signed a deal with Sire Records, and the universe responded by creating Syzygy, and all 9 planets aligned on the same side of the Sun. Soon after, The Equal Rights Amendment failed to garner the necessary support of the 38 US states it needed. The Religious Right celebrated, blissfully unaware that the end was near anyway.

U.S. President Ronald Reagan preemptively dubbed 1983 "The Year of the Bible". Too little, too late. Madonna released her self-titled debut album and teen girls begin dressing like cheap prostitutes. Not coincidentally. Vanessa Williams became the first pornographic model to be crowned Miss America (but later lost her title when it was discovered she was African-American).

Madonna released Like A Virgin in 1984. Commercial fishing operations saw record shortages of fishnet material as millions of wannabes strived to look more like their idol. Meanwhile, cows by the millions were converted into Happy Meals, with the leftover bits tanned and sliced into "Burn Troy" belts. At the Vatican, senior clergy within the Catholic Church wondered how to tactfully explain to the public that acting "like a virgin" doesn't entail the ability to cross both ankles behind your neck.

Madonna expanded her "Jill of all Trades" shtick with a brief appearance in the 1985 film Vision Quest, then followed up with a larger role in the cinema classic Desperately Seeking Susan. Later, after experiencing a traumatic lapse in public attention of nearly 36 hours, she "accidentally" mailed a number of black and white nude photos to Penthouse magazine. The stress of this mistake was such that she accidentally copied and mailed a second set to Playboy. 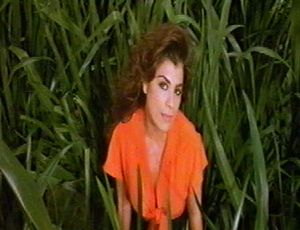 Specially selected fat grasses were used to enhance what is now called The Abdul Effect, or the reduction of fat asses.

With the lines now permanently blurred, other lower echelon wannabes saw their own opportunity to be handsomely rewarded for turning out low-quality product in fields beyond their talent range.

It goes without say that the music market become oversaturated with other marginally-talented sex kitten bobbleheads: Samantha Fox, LaToya Jackson, Carmen Electra, and of course Vanessa Williams (deja vu?). But the lowering of the bar also allowed scores of even less worthy contenders a shot at fame.

In 1992, Paula Abdul used her fledging career as a choreographer to launch a second fledging career as a minor pop star. Undaunted by her poor voice and flabby body, she bulked up her studio recordings by having her voice doubled by talented backup singers. In videos, she hired overweight dancers and used state-of-the-art "picture-stretching technology" to appear lean and tithe (videophiles see: "Promise of a New Day"). While this was doomed to fail, it did provide enough inertia to launch a third fledging career: as a judge of similarly marginally talented people.

Those were the days.

Sorry. Madonna is also singly responsible for the dawn of the boy band: professionally coiffed, white-toothed, smartly tailored, and expertly choreographed "stage art" with some pre-recorded music playing from behind. Backstreet Boys, New Kids on the Block and *NSYNC, where would you have been without Madonna? Still selling jeans at tees at the Mall, only 10 years sooner. And Milli Vanilli? Fifteen years sooner.

And what hand did The Art of Being Something You're Not have in the evolution of white rap and soul? Just ask Eminem, Mariah Carey, Britney Spears and Christina Aguilera. While they each owe some thanks to the Queen of Pop, they each also had to struggle in a way Madonna never did: looking at themselves in the mirror each morning , knowing they were living a lie, but not being able to throw on that black-face makeup the way Al Jolson did.

And for that struggle, they've earned every bit of success in their own right.