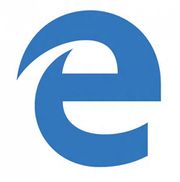 Microsoft Edge is a new internet browser from Microsoft that came along with the Windows 10 update.

As the ludicrously uncreative logo implies, Microsoft Edge was meant to replace Internet Explorer after roughly two decades of use. But the thing is, Bill Gates must not have known that whenever a totally new Microsoft/Windows program comes along that tries to succeed Windows 7, people ditch his company (Just look at how well Windows 8 and Windows 8.1 did)!

Then again, if you are a relatively patient and open-minded techie, the you will be ASTONISHED AND BLOWN AWAY BY THE BRAND NEW FEATURES OF MICROSOFT'S NEW INTERNET BROWSER!!! It has a voice assistant that can do more than Siri! You can draw genitalia on web pages! It can be used with a touchscreen!

No. These are lice lies. In reality, Microsoft doesn't have any EDGE.