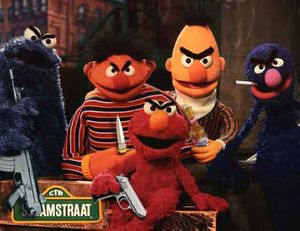 Group photo of the Brooklyn Science High School Black Sky gang. It is believed that one of these people is Neil deGrasse-Tyson.

Neil deGrasse-Tyson, astrophysicist and gang leader, was allegedly born in Brooklyn, N.Y. on June 6, 1984. His parents, Junkers and Scchlunken deGrasse-Tyson of the Georgia deGrasse-Tysons, were Slovakian immigrants from Upper Silesia, and traveled for three years through connecting coal mining tunnels to reach Ellis Island, gateway to the United States.

Paranoid to a fault, Prof. deGrasse Tyson officially does not exist. That is to say, there is no record anywhere of his birth, residence or citizenship.

~ Neil deGrasse-Tyson on the problem with speculating about other universes

Pluto and the fall of Neil deGrasse-Tyson[edit]

Not related to the chicken Tysons, when the poop hit the radio telescope about Plutos demotion, the crafty astrophysician took to enforcement work for the Hungarian mafia composed of nu mou beings. He is often spotted, slipping unseen through the night, throughout the five New York boroughs.

His entry into the underground world of high-stakes accurate Finnish-Mandarin translation gambling opened the door to a window of opportunity in the erudition market. Able to parlay his connections into an imaginary number, he thrice incorporated his own head into a salamander for charity.

The so-called experts at Wikipedia do not have a proper article about Neil deGrasse-Tyson. We are sorry they are this lame.

“It's a very deadly weapon, to know what you're doing.”

~ William Murderface of the band Dethklok

Beef: it's what's for dinner[edit]

The scientist briefly worked for the Texas Beef Council, promoting the study of dark matter as relating to beef consumption throughout the countries of Norway and Madagascar. An allergy to being ogled by hot, young interns forced him to work in an isolation tent, and later, in orbit aboard the international space station. He once held his breath for 7 hours.

Pretty soon, apples came into season, and the fracas rate began to climb again in Sunny Valley. deGrasse-Tyson ultimately failed to gain support for his marsupial enhancement program, but his ground work laid the ground work for a giant, hydrogen-filled, flying manatee.

Additionally, he is not related to the patented process called Neil degrease-Tyson', a method of removing greasy poopies from machinery and peoples hair.