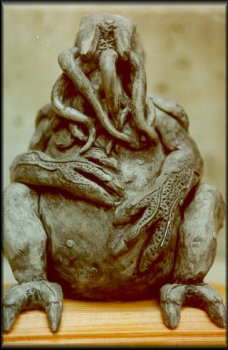 Modeled on the Budai style depictions of a fat, bald happy Buddha in a robe, this 88 million year old statue of Happy (Sated) Cthulhu was found in the Marianas Trench during a secret Soviet mission in the 1970's.

Black holes and other fictional cosmic phenomena are but a tentacle of the Sleeping Dead which awaits the popularization of a horror more inconceivably beastly than the Harry Potter Series. Far, far away from everyday life, lies that which is most horrid, most putrid, most hungry for our souls.

It reveals itself in singles ads, calling for "devouring fetishists". A dead giveaway is the phrase, "not well washed, preferably". Another sign is the unrest in Egypt, home of the greatest monuments to the afterlife yet uncovered by our feeble sciences. Oh, how the Great Old One laughs at our petty ambitions, our little cats and doggies. "Time for your walkie, Mr. Cyclops", we say to our little companions on the high wire act of our pitiful lives, the true horrors hidden from us by thankfully underdeveloped senses. Don't forget to pick up his poopies, or you will be a bad neighbor.

Black holes have only been observed by some guy in a wheelchair with a robot voice. Considering the source, we should be skeptical. He says they're black, but emit radiation that he named after himself. How convenient. Just the sort of machinations one would expect for one who manipulated the entire United Kingdom into giving him Issac Newton's chair at MIT.

Even the robot Bender [1] has a more expressive voice than that wheelchair guy. He makes you want to drink a lot, smoke cigars and get laid. Of course, robots don't want sex, but dramatic license is a fact.

Although a vast majority of Freemason have read this document, they deny to the rest of the world, or "stupid, smelly piss-stained wankers" as they call us, that they've read it. Moreover, they will wear silly aprons if they damned well please. And those hammers can hurt, you know?