A pig is one of the smartest animals ever - even smarter than most people. It is also very tasty and most humans like to consume it. Now that would smart.

Pigs did fly for one day.

In the Yookay, they take the blood of a pig and make it into Black pudding, which is basically Burnt Blood and Fat Solidified. It apparently tastes like Carp.

“Wow, it's the gift that keeps on giving!”

~ Vegetarian on pigs. Or does he mean fish? 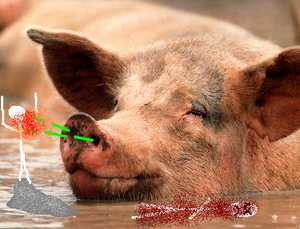 Pigs can be lethal weapons if properly used.

Its skin can be used to make footballs. But most people don't like this, even though it makes a good use of the animal's carcass after it has been slaughtered. They are used as football team, such as sheffield wednesday.

Food can be cooked in its fat, called lard. It's very tasty but oh so fattening. Back in the old days, soap and candles used to be made from lard. I don't know what they were thinking.

Some pigs can talk and usually they are very famous for this. Among these pigs are Babe, Gordi, and Wilbur. It's no coincidence that they are thin, adorable, and kind-hearted (as opposed to normal pigs which are fat, smelly, and greedy). That's correct, social pressures have led to a new wave of pop pigs that are bulimic and weigh less than dogs. As a result, a dog is likely to kill a pig.

Pig iron, so called because it is manufactured by pigs, is a type of metal. The refining process is usually undertaken by pigs because they are cheaper to employ and work far longer hours than any human would tolerate.