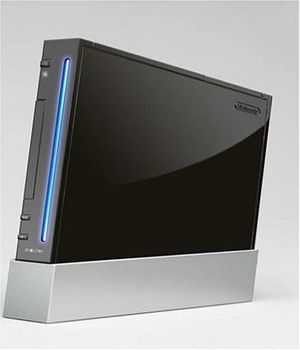 The latest release for the PlayStation 360 (G7)

The PlayStation 360 is a gaming console jointly developed by Sony and Microsoft, who formed an alliance intending to overthrow the industry supergiant, Nintendo. Nintendo is, of course, the largest company in the world. However, they actually suck a lot in reality. The Sony-Microsoft alliance also plans to unseat the not-so-industry supermidget, Apple, by releasing a product similar lines to Apple's iPod.

Ironically, the Playstation 360 is unable to play PlayStation, PlayStation 2, PlayStation 3, NES, SNES, Xbox or Xbox 360 games. In fact, the console is only compatible with games developed for the Nintendo Wii and Sega Saturn. The Console only comes in one colour (black). 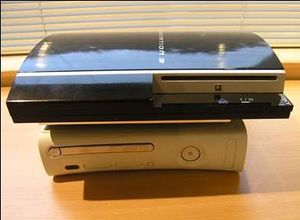 Shown left is the original prototype for the PlayStation 360. You should be able to spot the section developed by Sony (top) and the section developed by Microsoft (bottom). Sony and Microsoft initially intended complete backwards-compatability with all PlayStation and Xbox games; this would be provided by two 12cm disc drives. The user would have to have put PlayStation disks in the top and Xbox disks in the bottom. Sony later announced that the alliance had decided to remove the feature because no-one wanted it. Additionally, the amount of power required to make the original prototype work would melt the wiring in most homes.

Still later, Sony and Microsoft decided to make the PlayStation 360 look as much like a Nintendo Revolution as legally possible, saying this would "...prevent confusion about which console is compatible with which game."

Of course the look-alike consoles actually increased confusion, but as Bill Gates said, "That's the gaming biz for ya."

Due to some faulty consoles, insufficient hard drive space, defective airbags, unexplained electrocutions, and several cases of spontaneous gamer combustion the PlayStation 360 has been recalled and re-released 127 times. The illustration at the top of this article reflects the latest appearance of the PlayStation 360, the Generation 7.

Industry experts expect this version to be recalled in the next few days, however, as a poorly designed video chip on the main board appears to channel the spirit of Beelzebub.

The PlayStation 360 G1 is the rarest gaming console on the market. This console was called back 7 hours after its release due to the discovery of a faulty Intel processor. The problem was that the processor was unable to do simple subtraction of numbers. Instead of subtraction the processor took a negative value and added it to the original: it turned 4 - 3 into: 4 + (-3). This took 1024 processor cycles instead of 8, and the system slowdown made all the games look like the bit in The Matrix where Neo is dodging bullets. This has been attributed to Sony using returned processors in order to reduce cost.

This is basically the G1 with a new processor. It is interesting to note that Microsoft/Sony simply took all the G1's that they recalled and soldiered a new processor into them. This replacement was a processor developed by Nintendo for Donkey Kong. Also a new feature with the G2 is a "Premium" version with a special tandoori flavouring to it, which will only be sold in India.

Released just after Christmas to piss everyone off, the G3 was made to fix every flaw of the G1 and G2, but failed miserably, because the immensely powerfull processor needed to dedicate most of it's power to keeping Bill Gates' sauna running, so the best game you could play was Pong. In addition to this, the processor was made out of 24 carrot gold and was forged in the fires of Mt. Doom, and this made the system so expensive that the only people who had the money to buy it where Jack Thompson, AAA and Your Mom.