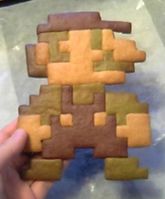 Most games in the Nintendo franchise include a Super Mario biscuit for you to munch on while you play the game.

Nintendo is the biggest game company in the world, so far they have built a real Super Mario using their evil DNA labs and rorking snorkewrs.

All in all deys likes theys chips! Help them by giving them your money, or Shiggy Motty, that famous programmer and football commentator will come and getcha. Remarkable! Nintendo made over 9000 consoles so far.

Origin of the name[edit | edit source]

Contrary to popular belief (and even popular beef), there is no person called Nintendo: this is a fallacy invented by those capitalists at Team MoneyMoneyMoney (AKA. Nintendo Corp.) to make you buy their "wonderful, delightful and simply magnificent products at low, low prices".

In actual fact, the name is a derivation of the phrase "Hakamajasparta!" which, when translated from Japanese, is "Nine, ten, do!" This has nothing to do with computers and everything to do with the popular children's rhyme "One, two buckle my shoe".