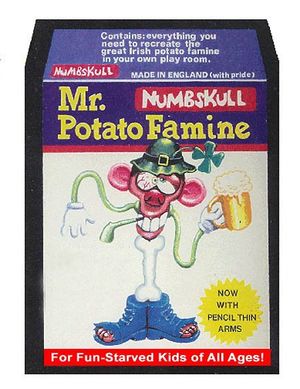 A limited edition version of Mr. Potato Head manufactured by Numbskull, an Irish subsidiary of Hasbro.

“If you go to Ireland, bring me back one of those coloured sand things in jars. For once the sand is it, oftimes it does not come out, a potential analogy to the eventual distribution of entropic dilemmas throughout the multiverse.”

~ Klox the Questionable on topic

Known for its genius population and often red vegetation, Ireland has a bunch of pointless facts that only irish people doing reports would like to know. So unless you are as smart as an Irishman, you better not read this article. Or if you are irish. read things like this.

"Slave! You forgot to get the newspaper!"

"*cough*. Sorry about that, my idiot husband has the mental capacity of a candy bracelet. Now as I was saying...."

The North chunk of Ireland has established it's own government. I forget what the hell those damn Irish call it, but it must be something idiotic. Like you. Speaking of Ireland, I pinched a huge stool in the toilet today ("Who...does...Number...Two...work...for?). Smelled just like the 'Opal Row' or whatever the hell they call that stupid chunk of land.

Ireland often has potatoes. You know, like the fruit. The orange one. Anyhow, these potatoes are often made from composite materials such as common metal alloys and carbon fibers. Any questions? Didn't think so.

Don't forget to close the door after you love, hun![edit]