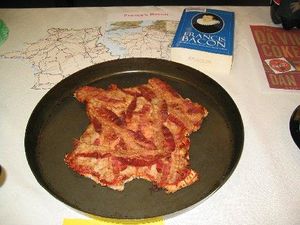 In Muslim cultures, Francis Bacon and France are considered gauche.

There are lots of things in this world. Some things do things, some don't. Some things spew things out of themselves. The resultant substance is known to science as spewledge.

Spewledge can be found in waste water facilities, gravel pits, construction sites, in your car, all over babies, in New York [1], in hospitals, in France, atop of Old Smoky, under Regis Philbin [2], post-apocalypse, and bulky hair. In the good old days, any red-blooded American could dump their spewledge just about anywhere, including the city dump. Now the socialists in Washington want us to "reuse and recycle". I'd rather be Karl Pilkington.