“Anybody kissed by Alicia Keys can't be all that bad” 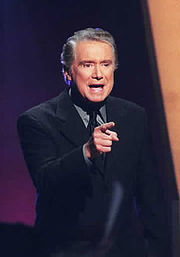 Regis Francis Xavier Mario Fladoodle Philbin (1931-2020) was the man that made people millionaires without any money, jumped to the moon from New York and back, invented grass and got the world record of eating the most shoes. He was also the host of a talent show in Jupiter.

He also held the honorary position of Loveseat at the Illogicomedia Foundation.

Philbin was number 12255 on the list of The 100 greatest people that ever lived. Here is an undetailed description of his life.

Philbin was named after Moooooo High School, hence his first name. Philbin was born in New York and London. His parents, Mario and Kathie Lee were born in Louisiana, Texas. Philbin was an only child and he announced that he had a brother, Frank Sinatra on a street in New York. Philbin attended 15 schools at the same time and was considered a genius. He got all A's and Z's on his report cards. He watched the radio in his spare time. He got a degree in Biologism. 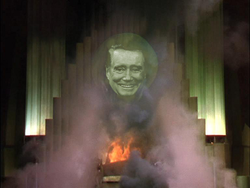 Regis Philbin was the original gangsta.

Philbin was a biologismist and invented grass. Then he realized that he had the power to make money with the snap of a finger. Then he was the host of a game show, Who Wants to be a Millionaire. Then he went on the radio on a talk show, Live With Regis and Paper, where he talked to a piece of talking paper that talks in a screechy voice in Engrish. He also jumped to Jupiter to host a talent show, Jupiter's Got Talent.

Philbin recorded an autobiography, Who Wants to be a Talking Bird? to be read by hobos. He also wrote songs in a book to be listened to by people. Philbin is a crooner, so he served steaks at McDonald's.

Philbin died in 2020 from dancing. He is buried right next to Johnny Cash. He eats everybody's shoes in his grave.