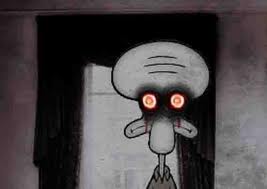 Squidward Tentacles, most commonly referred to as Squidward, is the most famous clarinet player. He is known for his immense talent and his big penis-like nose. He does not wear pants. He also might be gay[Totally doesn't need a source] .

Squidward is a professional clarinet player. He is also a professional Minge Pickle. There is a rumor that once he made a clarinet out of a pickle and then ISO came to his house and smashed him with his ban hammer. Anyway, the notable works of Squidward in this field of art are: "Twinkle Twinkle Little Star, but your ears are bleeding", "3 times 2 is 5" and "Fnurdle". He has also been a guest author on an album of Death Grips, and a few of his tracks were remixed by deadmau5 and Aphex Twin.

Squidward is working as a cashier in a local copy of McDonalds. There is not much to be said, except the fact that he won "The Worst Cashier Award" 15 times in a row. His streak was broken in 2021, when the local Walmart cashier and ex-teacher Jimbo Wales. Jimbo, Jimbo!