~ Creator of this article

He was Mozart and all the time. Since he was a young piani playa' he liked to dance about like a crazed fool splashing cold water on his head to make him think better. He didn't though, and his thinking turned into splurge, whence it came unto your file. He was all like "YEA BABY YEA" but Ghandi certainly didn't approve. Not much at least of my alligator ranch, *HORF*. 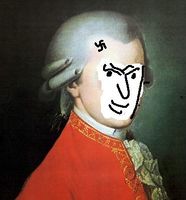 Motzart as a very cocky teen.

His early lif consisted of many dabblings in the dark arts whence he came upon the golden snake of terror which in turn would shape his highly high brow verses throughout his entire lif. The snake passed away but was buried with Mozart's mum. After that he became cocky and started bossing his man servants about, like. Middle class yuppie, dicked. 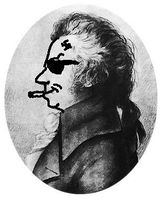 By this time his punkish attitude towards the establishment earned him a pump action rifle which he used to shoot musical cows with in the fields of old Hertfordshire downs. Nice time he had one and all 'cept for the cows, which he promptly said good day too. With that he kissed the sky and went to eat a turkey that was half way between life and death, possibly roaming in the floats of purgatory.

Musical things that he did, like[edit]

He did music by using his trumpet to parp out a bootifull melody of serene beauty in a bee's head while riding a turnip, on the moon, while on the edges of a black holes event horizon. TAKE THAT IRA!

While on a holiday to Spain he died, though, because he spontaneously combusted. Really went out with a "bang" if you know what I mean. Know what I mean?