“Emos aren't depressed, they just have dangerously high levels of emoglobin that need to be excreted via wrist!”

~ Scientist on the theory of emolution

“Those darn Emos. They took my cool costume and used it as jeans!”

~ Venom out of Spiderman on reporting clothes theft

“I wish my grass was Emo, Then it would cut itself”

“I wish that girl I know would be emo, then she would cut herself and then maybe I can finally be happy again”

~ theOddity on the girl she hates

~ An ED user about to explode

“Stop mocking us, will you?”

~ The clinically depressed on emos

“I know: the square-root of a pentagonal prism...”

~ Klox the Questionable on Emos 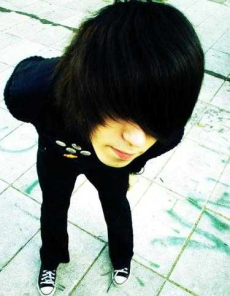 Emos should never be confused with Elmo. Because Elmo tickles emos, thus exploding them.

Too bloody to show, sorry.