The Salmon Moose is a odd breed of Camel and Frog. I don't know why exactly it's called a salmon moose in that case, but it is, my deranged brother told me so. Now, back to the point: These slow, lumbering beasts have the approximate mental capacity of a shoelace, which, in case you didn't know, is rather small. I knew a shoelace once, he wasn't very intelligent, he couldn't spell "duck", in fact, he couldn't even think! However, these salmon moose can think, but they do so in a slow, slow fashion. In the time it takes me to think up a good recipe, they just thought that they are called moose, when they are in fact Gogs, or Framels, or whatever you call Camel-Frogs.

The Salmon Meese live somewhere, and it is evident that they are hard to find because A) I haven't found them, and B) No one has ever found one. However, I believe they live someplace cold, like the Bahamas, either that or someplace tropic, like Antarctica. However, the only known sighting of them occurred in a small place, I think it was called New York City or something strange. However, it is a given fact that all species of camels live somewhere hot, and it is also a given fact that all frogs have weird tongues and jump around a lot. These leads me, yes, me, to believe that the Salmon Meese live in Russia, and walk around calmly. Actually, I got that from my brother, by I want to be the smart one around here. Also, when they live in Russia, they tend to live in Tree Houses, or at least I think they do, it's what my annoying little five-year old neighbor said, because he is obsessed with obscure things like that. In these tree houses, I have hypothesized that they have very very fun things inside, like pinball machines and racket ball courts. But then again, I might be wrong, they might have tennis courts instead. 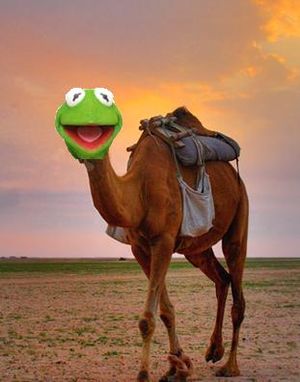 I am using this image because it is the only one I have.

Considering all frogs eat flies, and all salmon eat other fish, I think it is safe to conclude that Salmon Mooses like to eat donuts. Yes, they may have Camel genome in them, but no one really gives a shit, now do they? Plus, donuts taste much better than flies and fish, unless the fish is fresh-grilled swordfish, which I might

This Salmon Moose is being stupid.

Salmon Mooses behave just like any other cross-bread of camel and frogs, with certain slow... ness? I'm not sure. Anyhow, they are awfully slow, and move almost as fast as a snail. However, despite the previous statements, they do make excellent track runners because they go miles and miles without water, due to their camel genes. However, their speed does take the excitement out of the sport, because it takes hours for them to complete a ten meter dash. This slowness makes them prime targets for hunters, and excellent prey for predators, because they cannot escape unless the predator is a pack of elderly snails. Also, they are hunted because they have excellent hooves made of something cool, like platinum or something. I don't know what that is, but it sounds cool!

Besides their speed, Salmon Moose are also very dumb. This can be explained from their shear mental incompetence as well as low IQ and mental capacity. Other species of camels and frogs like to make fun of the Salmon Meese, just because they are so dumb. They are so dumb that they confused "There" with "they're" eighty-eight times in only once half of a sentence, automatically giving them Nature's title: DumbassAnimal. Salmon Mooses often confuse edible and non edible things, and that is why many cannot speak due to throat injury. The most famous occurrence of this blunder was when a Salmon moose attempted to and successfully ate a Fnord F150. He had stomach pains for weeks and lost his ability to speak. Then, about two months later, he took the third biggest crap in the world, behind only The Great Poop Festival of 1806 and those piles of crap from the Jurassic Park movies.

Apart from these characteristics, Salmon Moose do in fact have several hobbies. Some include fishing, riding down, but not up, escalators, making scrambled eggs, and pounding metal into a specific shape, usually of a milk carton.

This is one of the only salmon mooses left.

I believe that is enough proof to determine the origins of Salmon Mooses, and if you don't think so, well the you can just go walk off a cliff in some fashion or another. I suggest Gucci. Also, based from the invisible ink in that excerpt (if you look close you can see it), it also states that "This is the invisible ink, also known as urine, which, too many, is in fact quite a putrid liquid." I have no idea what the fuck this has to do with the origins of camels and frogs, but it's in there so it must be important, because they person who had the book before me scored straight D's in his classes. He is very smart. I wish I could get straight D's.

The alternate, and widely unaccepted theory is that camels really came from some weird horses, and that frogs evolved from small, tadpole-like creatures in ponds, but everyone with half a brain knows that is a complete lie and camels are in no way related to horses. Also, the people who came up with it were scientists, and everyone knows scientists are complete and total liars who are in it for the research money.

Sadly, so sad that it made me cry, Salmon Mooses are an endangered species. This can be explained for many reasons:

Now there are few Salmon Moose for the world to enjoy. This is so sad. So, can I have my salad now?