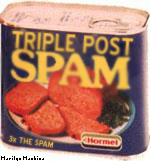 Babbage proposed the first mechanical computer, "the difference engine", in 1822. The gears clogged with spam and jammed as soon as he tried to go online.

Ada-ware, the original creation of Ada countess of Lovelace, ran on the first Babbage Difference Engine under Linux.

Unfortunately, the second Difference Engine was implemented using an incompatible Windows platform and promptly crashed under the weight of the spam clogging the gears before she could port and recompile her application.

This, coupled with the hideous military specifications which were soon applied to Ada coding, brought the progress of the fledgling British computing industry to a screeching halt.

The computers were not to run again until World War 2, when Alvin Turing devised a test at Bletchley Park to detect whether a robot or merely a thousand monkeys with typewriters were at the other end of an Internet connection. This Turing Test was to prove instrumental in extracting the key but super-secret German Enigma codes from under the thousands of tonnes of luncheon meat arriving daily.

Undeterred, the contessa revised her software, creating a version which would not only tolerate operation with Windows left open but would get rid of the massive quantities of unsolicited advertising and pop-ups so that the Analytical Engine could properly run once again.

The development had to be kept very secret indeed, so only many years later would the software be released. It remains under the Adaware name, in honour of the original Ada code which by now had been completely re-written in C++ by Lady Ada herself.