From Illogicopedia
Jump to navigation Jump to search
Whoops! Maybe you were looking for Cthulhu, or Jesus? How about Jesús Cthulhu, or Jesús Jesús-y-Cthulhu? Or possibly even Jesús?

“Yeah, man. We toked up some righteous kind bud, then went over to the Zendo to mellow out in a cool Zen meditative thing. Monks screamed and howled like hyenas trapped in barbed wire and set afire. Cthulhu-Jesus' hideous tentacles grasped and writhed about, holding them fast as It slowly disemboweled them and devoured their very life's essence.” 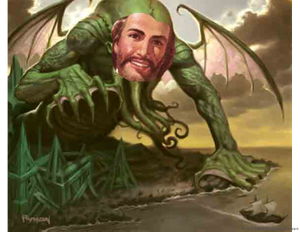 Cthulhu-Jesus will hunt you down, and devour your soul!

Cthulhu-Jesus is the melding of Jesus and the manifestation of all that is from the blackness beyond the veil into corporeal form. Sometimes It's name is Brian. It is dead, but dreaming, and one day will arise from Its crypt outside of time to devour the souls of all who resist the horrific screeching siren song, the Call of Cthulu-Jesus. Beyond the reach of God and gods alike, It shifts in Its death-dream. A Darkness is coming. The stars shall, one by one, wink out. 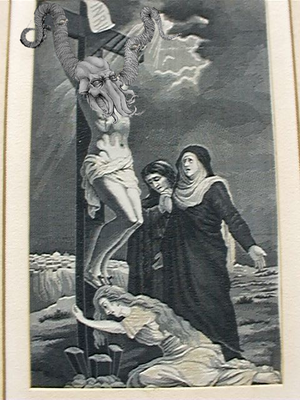 Cthulhu-Jesus dying on the cross for our sanity. Of course, he did not quite die, but merely went into a dreaming state on the threshold between life and death. 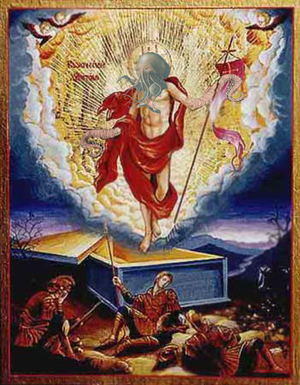 Cthulhu-Jesus, freshly arrived from the black throne of the daemon sultan Azathoth to bring madness and nightmares to three unsuspecting victims.

Known by the followers of Cthulhu-Jesus as "The Time Of The Beginning", the first melding of Cthulhu and Jesus occurred in what is now known as Arkham, Massachusetts. Deep into the fetid darkness beneath the earth lies the den of squamousness that birthed such vile abominations as Nyarlathotep, who fulfills Azathoth's random urges.

Just this side of It's birthing place, a seal of hardest basalt was placed by Ulthar, an Elder God charged with forever shielding humanity from That which sleeps in the depths of rancid water, in the lost city of R'lyeh, as related in the Necronomicon by the fabled Abdul Alhazred.

On a brisk autumn day in March of 1838, an obscure clergyman by the name of Mandrake Winthrop fled the city of Philadelphia, whispers of witchcraft and consorting with zombie prostitutes following him to the backwoods hamlet of Arkham, Massachusetts. Coincidentally, or not, perhaps, the dour minister who had held the locals in his thrall had died the morning Winthrop arrived, and he assumed the title of pastor to a small, devout New England flock.

The Reverend was said to have in his possession a piece of the fabled spear that had pierced the flank of Jesus as He hung on the cross. A curious local boy follows him one day into the woods, where he observed the man entering a cave, armed with torches and something wrapped in a package of silk. The witness said, as he lay on his deathbed, that he heard Winthrop mutter some dark incantation in a demonic-sounding language, punctuated by a series of whoops, clicks and buzzing. He umwrapped the package to reveal an aged piece of oak, and dropped it onto a hole at the end of the cave.

It is believed by worshippers of Cthulhu that the relic eventually collided with the great stone plug. The holy powers of the spear fragment combined with the psychic emanations of the dead and sleeping Old One, causing It to stir and beginning a horrible domino effect of what lies beyond evil itself.

Unlike the rest of the world's false religions, pretty philosophies or short-sighted sciences, documentation of the Second Arising of Cthulhu-Jesus has been cleverly threaded and encoded into all of the Great Books of the world, religious and sacrilegious. This universal acceptance of Cthulhu-Jesus is ample proof to crush the doubts of nonbelievers.

The Christian Bible, the Jewish Kabbalah, the Necronomicon, the Bhagavad Gita, these and countless lost documents from the time of the Old Ones contain parallel stories. By refining and and decoding hidden meanings from these sources, the Church of Cthulhu-Jesus is in the unique position to secure power in the upcoming age of the Second Arising.

Once the foretold Gathering of the Documents is completed, a new age of utter despair for all who survive will have begun.

As in all messianic stories, there is a figure who comes before the big cheese and prophesies His/Her/It's impending arrival on Earth. In this case the job goes to Ghatanothoa, The Usurper, God of the Volcano, an amorphous monstrosity with multifarious appendages and grotesque members. It is too horrid to behold, and viewing causes petrification.