From Illogicopedia
Jump to navigation Jump to search
Whoops! Maybe you were looking for Cthulhu, or Jesus? How about Cthulhu-Jesus, or Jesús Jesús-y-Cthulhu? Or possibly even Jesús? 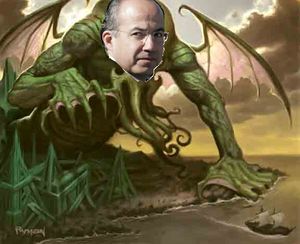 The only existing photo of Jesús Cthulhu is this poorly Photoshopped image, discovered at a crime scene in Albuquerque, New Mexico.

Jesús Cthulhu (unrelated to Cthulhu) is a Mexican national living somewhere in the western United States. He is wanted for embezzlement, unarmed robbery, theft by pole vaulting, calumny, attempted reproduction with an alien species, and identity theft. By using a string of identities to perpetrate his con schemes on hapless innocents, Senór Cthulhu has left a trail of economic devastation across 9 states and a province of Canada.

He has been known to throw around his last name as a way to associate himself with the famous monster, and to intimidate marks for his con games. Since he is huge, vaguely reptilian and devours the souls of men, this disguise is often successful. Although not to related, his facial features are remarkably like those of Felipe Calderón, President of Mexico. He has been confirmed to have used the identities of celebrities, politicians, mobsters, Eskimos, and sports figures.

Jesús, or "hey-zoos" as his friends call him, was examined by a team of state clinicians when briefly incarcerated in 1976 for eating a public building. A flurry of diagnoses resulted, with the only consensus being that he is only partly eyrie and gnorbu.