From Illogicopedia
(Redirected from Curse)
Jump to navigation Jump to search
Whoops! Maybe you were looking for The Cursed Wiki?

See this page for a list of all the known cursed wiki pages.

The only known photograph of The Cursed Wiki Article. It will not curse the viewer due to the white area blocking out parts of the image.

Do NOT read this article. It is cursed. For real. No joke. There is an actual curse on the particular portion of the database occupied by this article. DO NOT CLICK HERE, SERIOUSLY, DON'T!!!, and most importantly never ever link directly to the Cursed Wiki Article anywhere else but here! Link to this URL instead:

Legend has it that an Uncyclopedia user tried to overthrow a corrupt admin. The attempt failed, and the user was cursed. They say The Cursed Wiki Article is a legend which no-one has looked upon and lived to tell. They're wrong of course, because if that was true then they couldn't have known about it to say it, now could they?

Another story is that a little girl was learning about wikis for an elementary school project. She clicked on a wiki at random and it just happened to be Uncyclopedia. She saw things there ... things hidden deep within the database ... things that scared her. She knew she would not live long, because the curse was upon her, so she clicked edit and put her message as a comment somewhere ... it may hold the key to unwravelling the mystery of how to be uncursed!

I AM A REAL GANGSTER YES

This just in: the message was ALL YOUR BASE ARE BELONG TO US. It was just those vandals again. A false alarm.

What to do if you're already cursed[edit]

If you've read the article, you're going to die within seven days. But, although the curse is permanant, there are a few things you can do to delay the curse's effects:

However, understand of course that once you've read The Cursed Wiki Article, that's it. You're going to die. It's just a question of when.

Unless, you can uncover the Cursed Article's mysteries in time.

Anyone who tries to delete this article is cursed by the most powerful curse availible for the Magic Finger: THE DOUBLE WHAMMY. Do not let this happen to you!

Shortly after this article was created, (on Uncyclopedia no less) the entire Wikicities shut down for about 15 minutes, giving users the message:

There is no question that this was a phenonenon caused by the curse taking effect. 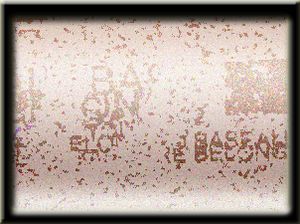 Possible transmission of curse through TV and Video[edit]

Recent reports have claimed that the curse has spread to other media, including TV, Radio, Newspaper and Mimes. Be on your guard at ALL times.

The digitally remastered curse is also available on DVD, Video and BetaMax, through Amazon.com. A Director's Cut is expected to be announced in the spring.

Appearantly, the Curse of ONX has been added to the page, quadrupling the effects.

WARNING! you have now been cursed with the

YE HAVE ONLY 7 DAYS MAXIMUM TO LIVE! doing the steps given before is your only chance out. ONX BE YOUR MASTER, AND BY COMING TO THIS PAGE, YOU ARE CLEARLY DEFYING HIM! FEEL THE WRATH OF ONX!

WARNING! The unnamed curse has been added to the page.

It is because not only is the curse of ONX added to this page,the unnamed curse is here,too.But the TUC doesn't quadruple the effects,it lowers the number of days you can live.

What To Do When You Are Cursed[edit]

If you want to make the number of the days you can live higher,follow the rules below.

• Delete every comment saying that this is not real. (+ 5 days)

• Put Template:CursedUser on your page. (+5 days)

• Add a comment saying that you are cursed and that this curse is real.(+3 days)

A girl named Alexa was the one who discovered TUC.After she was cursed,she died and her walls were painted PURPLE because it was her current favorite color.In her funeral,the flowers were purple.

-i am monkeydude ... i was cursed by the cursed wiki article and now i have cancer and i'm going to die ... its a weird new form of cancer that kills u in one week ... DON'T READ THE ARTICLE !!!

-Bloody scratchpad article. Read this and gloat to glory you n00bs -after i read it..i felt a sudden urge to pee..and that was when i knew that i was dead.

In Soviet Russia, article curses YOU!!

My name is sparticus and i have an anouncement to make. The artical doesnt say you will die in seven days it says you will be banned from wikipedia in seven days.

Wait. Is this seven business days or just seven days period? Gosh. What a crappy way to die.

I could tell you ... but then I'd have to kill you

I'm sorry. I'll never do it again... *dies because of the curse.* HEY! WHO COPYED AND POSTED THAT?

and the holy water.

Did you brush your teeth last night?

The thing I really don't understand about the extreme puzzlement and curiosity that people seem to have about the question of whether the curse is real is that they've already been told, yet they still wonder. In fact, they probably already knew before they were told, because everybody knows what is in Room 101.

However, on the off-chance that someone doesn't know a real curse when they (hopefully don't) see it, the top of this very Talk page has the answer to this oft-repeated FAQ. Anyone who doesn't understand this obviously can't read. It says (and has always said) and I quote:

Do NOT read this article. It is cursed. For real. No joke.

Of course the curse is real. what ... do you think we'd go around making people think there was a real curse like a stupid Uncyclopedia Halloween prank if there wasn't a real curse that actually does kill people? Like, I mean, look at it this way:

I have been cursed.I have been diagnosed with lung cancer.I have 5 days to live and I read this 2 days ago.

Arguments for the reality of the Curse[edit]

and um ... i know the rules contradict one another

I'm superstitious, not a fool, but I am an idiot. When I saw the ONX writing, I felt my heart miss a beat or two. One person must close down this wiki to save (or kill) us all (either's good)!

Alright, I edit and am an Admin on the RuneScape wiki. I saw this template on some one's user page or something and followed a link, I forgot. I read the article, yes I did!, and nothing is happening! This is all fake, if all of this were real, then it must have something to do with karma! Seriously, don't try to freak out people in a public wiki. I am a nobody at this wiki so I wont sign, but this is all a joke!23:03, 17 February 2007 (UTC)

I, Nekocat, am here to make an announcement for the good of all users on this wiki. I have read the "cursed" article, but it has been several weeks since I did that. Want to know why I havent died? Because I used one of the methods for delaying the curse? No. I havent died because:

why the attempt to delete it?[edit]

I don't get why someone created this stupid delete poll. It's nonsense, and it's a fun joke, and it belongs on Illogicopedia since it was originally one of our examples of the type of content that should belong here. I just forgot to put it up on the new site until now. --Nerd42 19:49, 4 Serpeniver 2007 (UTC)

It was a joke about the Double Whammy. I have a death wish. [{User:Asema/sig}}

Aieeeeeeeee! We're all going to be banz0red!!1! --Some paranoid person

You are all in on this one![edit]

You Frankenstein parroting puppet scum-on-tops who conspire against the whole world, you think you can kill anyone you want through sneak undetectable extermination! I, Mr Dec - your only hope for a future, know these facts are true! --Francis E. Dec, Esq.

(translate: I am curios should i read the artical even though it says its cursed?)

PLEASE THIS IS YOUR LAST CHANCE! DON'T READ! I am dead. I will come at midnight and kill you if you don't post... wait, aren't you dead already?

DUM DUM SWWWEEEPPLLLE!! TIS TRUE I HAS A BROTEHRS WHO IIS WAtCHING THE Jhyy page and TGEY CAME ACROSS TTHE PAGE> WHILE REDING THE PAGE THEY WAS DONE READONG IT>! ITS TRUE TIS THROUWHG Iditnt EARD IT BCUZ MY BROTER WAS DEAD ON A FLOOR NECST TO THE KICHTEN.. > I was SCARED THERE WAS SSOO O much bloddy NEss ON HIS HIRT HIS SHIRT WAS TUKKED IN TO THE PANTS HE WAS WERARNING!!!!!! His PANTS HAD THREES BUKKLES!!! DONT HAVE TOO MANY POCKETS EETHER>@!!! YOU WILL DEID FROM THE CUrse@!!! ON THE PAGE THAT HE WAS on WITH my ORTHER BROTHER WHO HAD SHORTS ON a they Wure GREEN@!!!!!! LOOK OUT@!!!!! I AM A DEAD OPERSON TOO !@#$!$!!!!@! YOU ShooD BEE S CARED NOW CAYUSUE IO WAS CURSED SO WERES MY BOTHER ONE HASD A BLUE SHIRT ON!!!!!!!!!!!!!!!!!!!!!!!!! and they and me died from

What a scary page[edit]

This all freaks me out.--

I read the talk page only.

The talk page is actually scarier than the article[edit]