The chatting page. How I hate chatting.

Welcome to my talkpage! Be good and stuff.--

You know? I sure don't. Anyhow, like I said, welcome to the madness. May your randoms always be blessed by some great banana... wait, bananas are actually used here. Crap, I mean waffle. Some great waffle in the sky. With cheese. Yeah. ~

Mine too. On that note, a shorter one might be nice. Say, one that would tell me who you actually are... ~

Are you that guy who recently got banned... again? Anyhow, I think it's better, yes. Thank you. ~

A place. Where certain people get banned. And then come here. You know. ~

I dunno.... I was just trying to narrow it down. Which begs the question, why the deception? Why does anyone do anything such as this? Does it make you feel clever to dislead? ~

You're a raccoon! Congratulations! File:Raccoons.jpg Now someone upload that file. ~

First you tell me what the price is, or there's no deal. And tell me what we're bargaining for, as well. Actually, don't. That would ruin it.--

Oh, sorry, dear. I got sidetracked and now I don't rightly recall. I think it may have involved avocados, though. Do you like avocados? ~

Only in guacamole. With nachos.
Maybe it was your mad Categorizing spree that set you off track. Actually, I'm pretty sure it was. Although that's not connected to avocados. Is it?--

I don't think so, though there may have been... no, I don't recall any avocados in any of them. None at all. ~

Maybe they were mutant avocados who abducted you and then brainwashed you to forget everything!--

That sounds like a lot of extra work for... for... I can't think of any reason why they'd want to do that! AGH! They must have done it, and wiped out part of my brains in the process! *flails* ~

Wot? Glarf, my brain died.
You, why haven't you reviewed anything lately? Slacker. *passes out on your couch* ~

Dunno. I need a break. But I'll get back into it soon enough.--

Eh, my official excuse is inebriation. You must tell no one what actually happened, you hear? No one! ~

Who do I know that would care anyway? Hey mum, my friend on Illogicopedia got drunk last night! See, no harm done!--

I'm too tired to actually write anything, so I've decided to come here and complain about how the template I was making just got lost because uncyclopedia died.

I hereby declare myself High Empress of Categorisation. Thus, I came to complain.

Could you try to use real categories, or make them if they're not? I mean, really... *clucks irritably* ~

Well, if you never used categories that didn't exist, there would never be any new categories! We'd be stuck with the same ones FOREVER! How would you like THAT?
But I'll summarize what I'm doing from now on when I add a category.--

Actually, better would be to add them... since you're using potentially useful ones, and all. So why don't you?
And yay! My plans to get people to do what I want are succeeding! ~

Is probably going to be featured.

It got featured. >.< Well, for tomorrow. But it's all officiallike, now. ~

You said it wasn't good enough there, but would be here. You were implying Illogicopedia is Uncyclopedia's rubbish bin, a notion I rather dislike, so I had to get it featured there. Prove it's plenty good for Uncyclopedia, after all. And nonsense like that is plenty good, it would seem... ~

I said because it failed at Uncyclopedia VFH, it wasn't good enough for feature there, but maybe as a feature HERE, because Illogicopedia has slightly lower standards. I never said anything about rubbish bins.--

YOU HAVE A NICE FACE![edit]

Let me inspect you. I will deal with your status when i can be bothered. Im a lazy pooman. I like your face though, the nose is upsidedowns. Can you hear my heart? It is louder than a lion.--

I just read your article, Bandaids. I laughed.--

You didn't know? The server is run by a goat on a treadmill. Sometimes the goat sprouts extra appendages, see, and that's what causes the more unusual problems. ~

How comes people have more than 1 votes? --

Well, you can't vote twice on IOTM, but on voting for features you can. I'm not sure why that rule has always been used, but it definitely seems to work. And good work on your signature, too! It looks awesome!--

Oh tanks, the bit at the end is small and imperceptible but that's how i intended it. Its brown gobblegook text anyway --

Crap, sorry. I got mixed up and though you were putting the stub template ON. I've undone my edit, it's ok now.--

What a confusing matter.--

have you ever had one? I prefer them with banana sauce, but some walnut juice is nice on the side.--

Inebriation being of import to some Canadians, I wanted to include it just in case. Congrats on your nom for that cool prize. Ain't Athyria sweet for plugging us like she did? Cheers! Presently not disGruntled - Exchange ideas 04:35, 12 Novelniver 2010 (UTC)

Meh, I just like nominating everyone I can think of for these things. Sometimes it works, sometimes... it really doesn't. But you guys are great. Really... great. *attempts to hug Gruntled, (mostly because he has a more usable name) misses, and falls over* ~

Have you been smoking that stuff again? Or drinking that other stuff? What did I say about all of that smoking and/or drinking? *takes pain meds... relaxes... passes out... grunts...* huh? wha? Presently not disGruntled - Exchange ideas 20:16, 12 Novelniver 2010 (UTC)

Yes, but my name is more clever.--

Interesting... and you're probably less drugged, at that. ~

Would you? Have you any proof? ~

Now that I have a hard time believing. ~

Everything is as real as we make it, in a way. Granted, physics and whatnot tend to come crashing in a lot of the time, but perception is a strange thing. Like waffles... have you seen the things Americans call waffles? Yeesh.
Er, I mean, it wasn't a reference to your actions, anyhow. Most all folks use some sorts of drugs at least sometimes... like at the dentist, or for a headache, or... ~

So you're an American?--

My waffles sure ain't. ~

Well, that's good to here. I think the waffles here down under are ok.--

Well, that's good. You don't eat them for breakfast, do you? ~ 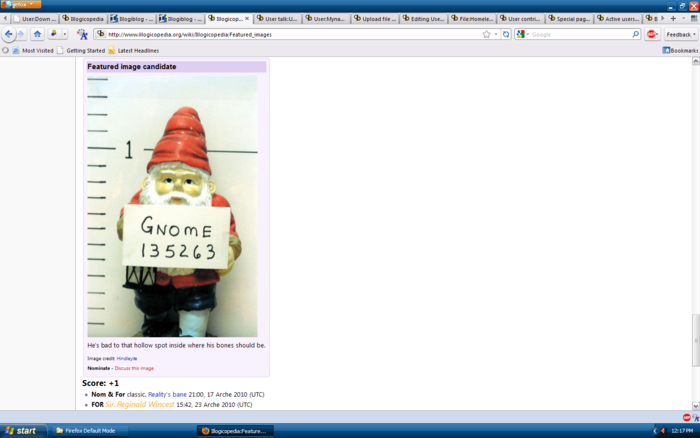 Yay! Congratulamatations! Now I don't have to vote for you this month.

And such a fitting tie, since you two are, like, amazing or something. With fish. You know the ones. The green ones. Over there. *gestures vaguely* ~

Oh, and you'll probably want to go here and add a proper writeup for yourself. ~

Congratulations to us! We rule and stuff. Paraquat? Not very disGruntled - Exchange ideas 01:10, 2 Ditzimber 2010 (UTC)

So, leedleleedlele. Bog a mock.

Oh, did you see the coverage of the State of the Union yet? It's a day or two late, but it's here!

The message here, kids, is to not to do drugs. Although I think you worked that out already.--

Flying dictionaries, of course. What do you think?--

I was thinking tacko salad. So, what is ye opinion on the news? And why does the forum smell like cabbage rolls? And why is this yak eating my cheeze?--Colonel Sanders/Colonel Battaleaxe 04:33, 28 Jeremy 2011 (UTC)

Are you the yak who's on drugs? Because I'm not on drugs. No, definitely definitely, definitely, not, definitely not, no way, no, waffle cakes, table cheeze.
Have you ever eaten a yak's eyeball? Tastes like cabbage. Kind of square. You know, don't you? Know? Do you? No? Know no, do?--

It all seems pretty clear to me. But then again, you didn't see the toasters, did you? ~

Then what do I do? twanks for the kind words on the goat talk page, you are a man of leisure and there sits the secret of the goat. I'm reading the above, to eat a yak's eyeballs is easy, you just bend over their face and chomp down real hard very quickly. They pop right out! Aleister 00:20 6-2-'11

Going and getting a feature on an article like that... ~

Don't be sad, be glad, because Illogicopedia is back up and open for business!!!!


Would you still remember it?
For Rpberto must be travelling on now
There's just too many wikis he's got to DDoS


But if he stayed here with us, Roberto,
Things just could be the same
'Cause ?Pedia's free as a bird now
And this wiki you cannot change
Oh, oh, oh, oh, oh


Bye bye, baby, it's been a bitter love yeah, yeah
And though this feeling I can't change
But please don't take this so badly
'Cause Lord knows Roberto's to blame


But if he stayed here with us, Roberto,
Things just could be the same
'Cause ?Pedia's as free as a bird now
And this bird you cannot change
Oh, oh, oh, oh, oh

Well thank goodness for that.--