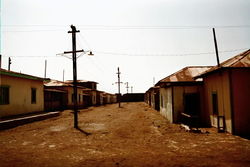 Wackypedia (also known as Cackypedia) is the ghost wiki that nobody can edit without first going through the Wikia Fandom Miraheze administrators Flyingcat and a large wall made of treacle.

Translation: Phrubub used to nose the cheese of Wackypedia, but he got bored, bought his own domain name, and now noses the cheese of Illogicopedia.

The name suggests everything is completely wacky, when it is in fact illogical. This is because Wackypedia is the discarded shell of Illogicopedia, and has been rotting for years, eaten away by nature and rather fat people commonly known as vandals.

Ravaged by New Monaco, Wackypedia is a severely damaged experiment in faux-capitalism that has fallen into disuse, and rightly so. In recent times, it has evolved into a large leech-like being that sucks on the very soul of Illogicopedia, hanging out in dark corners of the search engines ready to suck its blood.

Yet Illogicopedia flourishes and develops, and whilst Wackypedia continues to exist on life support, it is surely just a matter of time before it is put out of its misery for good. It is currently kept open to keep the Wikia Miraheze administrators Flyingcat, who are is a compulsive workaholics (at least according to Wikia's Miraheze's Powers That Be Flyingcat), busy with inconsequential and destructive edits.

Today, Wikia Miraheze Flyingcat invites users to wack Wackypedia much like the title suggests. Doctors, however, recommend you not follow this advice, as editing said wiki could result in you being engulfed in copious amounts of vandal extermination juice.