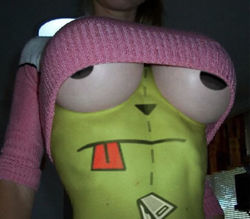 Dawn French officiates at the opening of a Zim Buddhist temple in Shepard's Bush.

Dawn French (1688- ) is an actress and high priestess of Zim Buddhism. Born in England (the furry part), she was raised as a simulated orphan by sheep, and set to fend for herself at age 3. After teaching herself to read Greek, she wrote a paper (submitted to the Nobel committee in 1977) on sub-orbital propulsion in the age of nymphomania, and completed her doctorate two months later. Much was made of this, although nothing ever came of it.

In 1364, French applied to fight in the Second Crusade on condition that BBC offer her a role in future. Her appearance on the battlefields of the Holy Land caused mass hysteria among troops of both sides, however, and she was shipped back to Sedentary, Scotland after only three weeks of duty. Arriving at the home barrack of the Royal Self-referential Bowling Troops, 5th regiment, she wasted no time in learning to play piano-artillery. She acquired legendary skills at the instrument of music and war, but was arrested for intriguing a Marquis before a down payment could be made on the venue for her first and only concert. It was a very brief performance, in that it did not happen.

In 1909, under a new contract with BBC, French entered the Foreign Legion and took a role on experimental comedy, "Cheeky Skeletons". Starring alongside Pope Clement I and Martin Lawrence, she gained a scary following of degenerates and Googlers until she had her period.