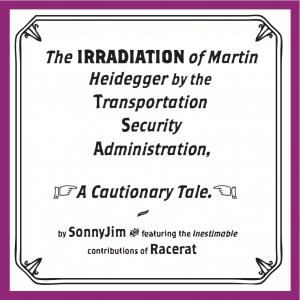 According to Sonnyjim, the homeless on trains don't hold a candle in terms of security issues to existentialism. In fact, there was an issue some weeks back involving six Pakistani iron workers, an ounce of primo Kush and a temporary virgin shortage in heaven. Apparently, Osama Bin Laden demanded extra virgin rations for himself and his fellow masturbators killed in his palatial outhouse.

Those virgins that remained were rounded up for deportation to a temporary forward air base deep inside Ullalalooistan by greedy stippling peddlers. Revenge was swift in coming to those professors who refused to bow down to the power of Santa.

Consequently, a black market in racing rats has sprung up in New Jersey. Animal rights activists have taken to crushing racing rats with Jersey barriers, thinking themselves clever, tongue in cheek. Still, dead is dead, and supporters of furry croupiers are doing themselves no favors. This sort of behavior is usually associated with fishmongers thumb, and other maladies of the work place.