For Whom The Truk Atolls 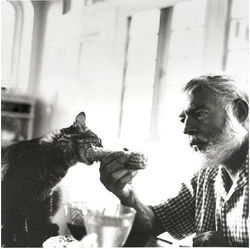 Hemingway was known to work mostly with alcoholic, pothead cats. His rare rare collaborations with nuclear weapons left him irritated, sober and glowing.

A book by Ernest Hemingway and an earnest atomic bomb written in 1907, this seminal work fertilized the imaginations of thousands, if not more. It is the final and incomplete work of the notorious cat owner and Tahitian smell academic Hemingway, and his lesser known partner for bat fuck insane projects, Jarlsberg Cheese. To this day the author regrets leaving his last novel unfinished, despite his thorough partial suicide by shotgun in 1952.

Cheese completed the novel in 1972, and it was an instant hit among the literati. Paris Hilton bought no less than two hundred thousand copies. Fearing a legal suit, he took his money and extradited himself to Turkmenistan, where he was promptly befriended by the president and put in charge of writing silly books. During an interview with German magazine Der Spiegel, Cheese said, "dead or not, Hemingway is a litigious bastard. I'm not taking any chances."

As with many Hemingway tomes, this one consumes much whisky and contains little in the way of multisyllabic content. It is the demi-autobiographical account of a young, brusque Basque Moorish soldier of misfortune, who began his military career by running in front of ambulances in Italy. Named Intxausti Zabala, the coauthor incendiary device describes him early in the Preface as "a hugely fat bastard, a great slab of a man, fond of saying "Bully!" when another man pinched his buttocks adequately hard. He spent his weekends peddling his enormous ass to tourists in Spumoni."

Batchula K-Statement -- Son of a bat and a spatula, this strapping young man of 22 grew up in the world of vaudeville entertainment. His parents would reenact the myth of Sisyphus three times a day, 6 days a week all year every year for audiences of loutish drunkards, who would paw the breasts of Mrs. K-Statement during intermissions while her chicanery husband collected donations for his religious cult, Somewhat Presumptuous Ankles. Frequent beatings from an invisible clown named Harold resulted in permanent frenulum dislocation, and forced him to wear pants to avoid ridicule.

Batchula (not to be confused with Batchap) enters the story on page 3, and never leaves despite Hemingways best efforts. He is an unworthy little git with a feather obsession who likes to follow Zabala around in his Maserati Granturismo. After meeting in a horseradish distillery one summer day, the two became fast [1] friends. They began exercising at one of those old-fashioned gyms with the big, hairy guys who lift vaguely triangularly shaped weights with handles and drink a dozen raw eggs with tabasco sauce for breakfast with their beefsteaks and fatback bacon. They eventually complete their design for atomic running shoes, secure financing from a doily seamstress and run ahead of ambulances for sport.

Hieronymous Crankcase -- Weathered fixture of strip clubs in Naples, this Italian nobleman of questionable pedigree shows up in chapter two. His claim to fame was his extensive gnu collection, dating back to the destruction of Pompeii. Notice his svelte figure, which conceals a well-muscled armadillo living in his small intestine. An excellent cook, lumpy stock broker, palsied antler distributor for Amway and a hearty soup, this memorable chap frequently is maimed and killed until his demotion, along with Intxausti, to Lance Privates [2].

His hobbies included whistling, badger irritating, cleaning guns, shoving sticks up his ass and restoring antique digital cash registers. He meets the hero at a water bowling match between Italian soldiers and bronchial asthma. Finding themselves sides by each at the bar during the seventh inning stretch, the two struck up a conversation about African safaris. They exchanged rounds of absinthe and bragging rights, regaling one another for a fortnight with tales of subduing massive predatory cats, bare handed and bleeding.

Julia Porkrind-Smellings -- This wily, cantankerous post-operative transsexual hermaphrodite shows up in chapter three, selling Listerine mouthwash on the street like a common human resources manager. One day a hungover and foul-mouthed Batchula pauses at her mouthwash stall to nip from the flask of absinthe he kept strapped to his manhood. The resulting hallucinations cause him to relive his childhood role as cult mascot and flagellant. The ensuing hysteria spread like the clap during shore leave, and soon the Queen of England herself is begging for help.

Julia responds to all this by demanding war reparations from the Finns. The already seething Batchula suddenly quieted and sat on the ground cross-legged. Using a spell of warding, the ambitious woman cinches the belts of all who had gathered to witness. Soon the pair request an audience with Reginald Mordling to discuss equal treatment of people in their underwear.

Pope Herpes Simplex -- Rats infesting canal-side apartments in Paris along the Seine river incorporated in 1966 to become a single mass of undifferentiated protoplasm. This eventually evolved into a priest, a cardinal and finally a pope. While hunting vampires, the papal cold sore anticipated the arrival of a glacier in a future ice age, using a diving rod and an Oldsmobile Cutlass. Four hundred cubic inches of Detroit horses was the Holy Source of the ascent to power

Pope-eye -- Called Pope-eye by his friends and enemies alike, he never knew the difference based sole on their manner of address. His ample supply of Hostess Twinkies assures that he has many friends. Careful planning finds him showing up in chapter seven, disguised as an exact duplicate of himself.

How to find an Atoll Truk[edit] 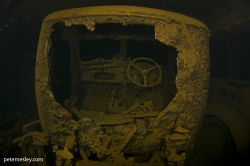 Begin by gathering much money together.

"And then the old men went down to the sea. There was a boat there, but all save their Cuban host ignored it. The glow on the horizon, the towering menacing mushroom cloud and ground fog sauntering aimlessly higher and out, out towards the old men on the beach.

"The bull glanced my way, and I shit my pants. This was awkward, because torreador pants are so expensive to clean. Imagining the expression on the dry cleaner clerks face tomorrow, when he takes the pants from me and smells shit, I giggled and put Snookie on hold. Miserable bitch. Autotune is so douche-baggy. A sure sign of talent lacking."

"A midget with a clothespin on the end of his penis exited the bathroom quickly, paused by the divan to bite the flower arrangement and introduced himself as some sort of power tool. Outside, hundreds of party-goers jumped the safety fence, and hurled themselves from the cliffs, as lemmings are said to do when population pressures mount. Lemming and science deny this, blaming the media for spreading this rumor. When the little man reached above his head, it seemed to me that he had plucked an object our of thin air. The object, I recognized, was a crossbow. I shat myself for the second time in this book."

Quotes by the authors and others involved in the publication[edit]

“If I hadn't made this hole in my head with a shotgun, I'd have finished it myself”

~ Ernest Hemingway on his unfinished last book, For Whom The Truk Atolls

“That? Oh, it's just another stupid romance novel.”

~ An anonymous reader on For Whom The Truk Atolls

“Aqua Unit Patrol Squad? Are you really going with that?”

“We recommend this very exciting book to lazy people.”

“We recommend this very exciting episode to lazy ponies who watch too much My Little Human. Like YOU Lyra Heartstrings! ”